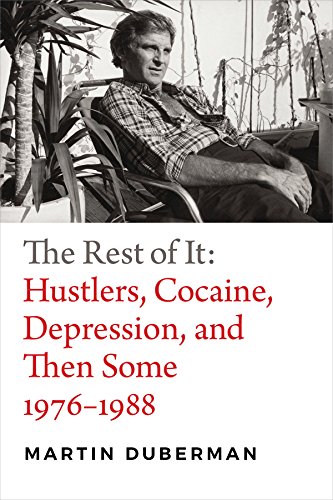 In addition to being a prolific biographer, and LGBTQ historian, Martin Duberman has published his candid memoirs, Midlife Queer, Cures, and most recently his diary Waiting to Land. Missing in that chronology are the years he deliberated avoided writing about because they were too painful to think about, until now, he reveals as in his latest book The Rest of It: Hustlers, Cocaine, Depressions, and Then Some 1976–1988.

The book is his frank account of years that he was spiraling out of control and dealing with addiction, bad affairs, and professional disappointments. At the center of his malaise the grief he was experiencing over the long illness and recent death of his mother. The opening chapters are an account of their unresolved, often contentious relationship as she battled cancer. As she became more debilitated, both guarded with each other, mother and gay son, try to make peace. The unresolved aspects of their love haunted Duberman and was perhaps the catalyst for the most emotionally turbulent period in his life.

Duberman at 50 was a prolific and successful writer in many disciplines and increasingly for his advocacy for GLBTQ rights. Among other achievements, Duberman was the founding director of the Center for Lesbian and Gay Studies at CUNY Graduate School. He was also a founding board member of the National Lesbian and Gay Task Force and other GLBTQ social justice organizations.

Yet Duberman was coping both personally and professionally with disappointment, and he was escaping into New York’s gay nightlife of drugs and sex. He doesn’t avoid any explicitness in the The Rest of It, but he also doesn’t dwell on these his wild days of drugs, bars, hustlers, and hedonism of the 70s and early 80s. He is honest about experimenting with his life choices as he approached middle age as a gay man, wanting to make up for lost time post Stonewall liberation and the bacchanalia of gay New York before AIDS.

The book covers a lot of ground as Duberman tracks GLBTQ culture, politics of the era, and his sex life, relationships, and his academic integrity as a liberal firebrand of inclusion and true equality. Holding himself to the same standards that he would expect from others. Throughout the book, we read even handed self-criticism and even measures of regret.

Duberman was seeing a trusted therapist who treated his depression, though he wasn’t convinced that it was helping him make peace with his relationship problems or his addiction problems. He had a heart attack and a major depression hit in the early 80s, when he was working nonstop on a slate of writing commissions; between teaching, writing, and his activism, he circled back to depression and addiction.

He was also traveling to London, Moscow, and throughout the U.S. for extensive interviews and research to finish his award winning biography of Paul Robeson. He gives his side of a controversy he was caught up in around the publication of the book, which had been largely discredited by Robeson’s son, even though he specifically chose Duberman to write the biography of his iconic father. Knopf had advanced Duberman a $300,000+ advance, which took seven years to pan out; things did not go well behind the scenes as Paul Jr. hated the book, contested Duberman’s reportage of among other things his father and his mother’s secret gay lives.

A forced rehab vacation in Maine seemed to be the catalyst for a spiral downward when he returned to New York. He hit the clubs and careened into a coke binge. Ill and nearly comatose to the point that friends became so concerned they stormed his apartment. His heart problems returned, and after being admitted to the hospital he ended up in Payne-Whitney for detox.

The Rest of It is not a revisionist memoir or the roars of a gay literary lion in winter. It is instead an intimate, revealing, and vibrant account of a writer’s personal struggles with Duberman in top form.  Duberman’s account of this pivotal time in GLBTQ history is as sharp as ever, even when that edge cuts into his own distinguished academic persona.