Resistance: The Underground War Against Hitler, 1939–1945 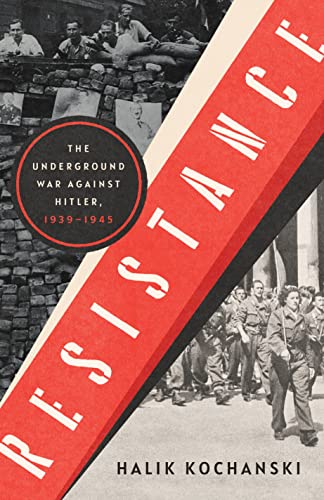 “not only eminently readable, but highly relevant to tell this remarkable story of ordinary people standing up to real tyranny against a determined and ruthless occupation force.”

The Second World War is one of the most chronicled events in history, with dozens of new books written each year. So finding new or underserved topics is uncommon, which makes this new volume on the underground resistance to the Nazi occupation of Europe a truly remarkable book.

This comprehensive single volume covers nearly every aspect of the various underground movements with an excellent narrative that digs through myths and misconceptions about what the various countries did or did not accomplish in their struggle against Nazi tyranny. The author pulls no punches in examining the interaction between the various underground movements from the moment the Nazis conquered most of Europe. The reactions by the conquered citizenry to the Nazis ranged from active collaboration to passive acquiescence and survival, and even a full partisan insurgency in the Balkans and occupied portions of the Soviet Union.

The Allied and German reaction to these underground organizations is also covered in detail. Although Winston Churchill immediately sought to support these groups to "set Europe ablaze," the effectiveness of the Special Operations Executive (SOE), the British organization charged with working with these underground groups and their American counterparts in the Office of Strategic Services (OSS) was mixed for the first couple of years as the agents and handlers had to learn basic tradecraft, and even in the later part of the war was never quite as effective as Allied leaders hoped.

The German reaction to these resistance movements was swift and brutal as they unleashed their highly efficient secret police and intelligence agencies against them, ferreting out and imprisoning or executing thousands of underground members. The Nazis were ferociously effective in Western Europe, at various times wiping out entire resistance networks and turning dozens of underground members into double agents, feeding the Allies false information and snaring numerous other Allied agents as they were sent to the Continent.

As these resistance groups learned the hard lessons of survival against the Nazis, they eventually did conduct some vital actions supporting the Allied war effort, including sabotage, which often resulted in brutal reprisals against civilians by the Germans; gathering intelligence, a key activity as the Allies prepared to invade France; rescuing downed Allied airmen and helping them to return to England; and ultimately providing direct military assistance to the Allies as their armies moved to liberate Europe in 1944 and 1945. In the Balkans and Eastern Europe, the Germans faced a full-blown insurgency where large groups of partisans attacked railroad lines, installations, and German troop units, often requiring large numbers of regular German Army units to conduct conventional military operations to attempt to contain.

However, these various resistance groups often had their own political agenda and sometimes spent nearly as much energy positioning themselves for the inevitable post-occupation reckoning as they did fighting the Germans. This was particularly true of the Communist resistance groups that took their direction from the Soviet Union and Josef Stalin. The fighting between the various factions in occupied Yugoslavia was often as bitter as action against the Germans and caused considerable challenges to the Western Allies as they had to decide whether or not to work with the Communist groups that often had competing political objectives.

Of course, the Soviets had their own rocky relationships with the underground movements in Eastern Europe, providing support to Communist groups while actively undermining other nationalist groups, particularly in Poland where the Communists basically allowed the Nazis to wipe out the entire Polish non-Communist resistance during the Warsaw Uprising of 1944.

When the war finally ended, the reckoning began, starting with war crimes trials against Nazis who had ordered or conducted reprisals against civilians for underground actions and against nearly anyone who had been considered a collaborator. Many were swiftly tried and executed, while others received long prison sentences and the eternal condemnation of their fellow countrymen. In Eastern Europe, many resistance members bitterly learned they had merely traded Nazi tyranny for Communist tyranny and were swiftly suppressed by Stalin’s secret police, who proved every bit as ruthless as the German Gestapo.

The mythology of the underground and resistance to Hitler began almost as soon as the war ended. Particularly in France and Western Europe, the national narrative was swiftly created that the citizenry resisted the Germans, while in fact most did not and merely tried to survive, in order to soften the national humiliation that the Germans had swiftly conquered these countries and occupied them for nearly four years before the Allies liberated them and restored their rightful governments, many of which underwent extreme turmoil in the immediate aftermath of the war.

This national folklore continues to this day, which makes this book not only eminently readable, but highly relevant to tell this remarkable story of ordinary people standing up to real tyranny against a determined and ruthless occupation force.