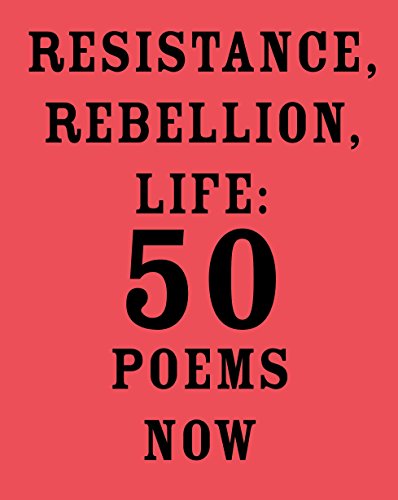 Somewhere after every NFL Super Bowl one will find many die-hard fans weeping for the team that lost, so it is with presidential elections. Donald Trump’s defeat of Hillary Clinton last November left many in shock and disbelief. After the election Clinton was spotted walking in the woods. Did anyone ask if she was writing a poem?

Amit Majmudar has edited a new poetry collection written by “creative first responders” to the crisis America now finds itself in. It’s still amazing why after the first drops of rain only Noah built an ark.

Majmudar in his introduction ponders the reason for political poetry as if he has just discovered dark clouds over his head. The case he makes has been discussed over and over again. He brings nothing new to the table except an old tablecloth 13 pages long. This small book only needed a preface or short foreword.

Among the 50 poets included are several with major names, which means you can walk into any bookstore and find their work; one doesn’t’ have to search on Amazon. Juan Felipe Herrera, Jane Hirshfield, Sharon Olds, Paul Muldoon, Kay Rayan, and Robert Pinksy are six reasons out of 50 why you might want to read this collection.

To some extent all poetry is political it just depends on which side of the bed you get up from or whether you even have a bed. There is much protesting taking place across our nation. The word resistance has become a popular word to use in public. Are the times so dire that we feel our democracy is on the ropes? Contributor Richie Hofmann ends “Children of the Sun” with these lines:

We used our phones to read articles about rising anti-

and felt doomed and lucky.

We lived in New Jersey and Boston, Atlanta, Baltimore and

There was violence, and it did and didn’t touch us.

Majmudar’s anthology comes in the pocket size format of those types of poetry books City Lights Bookstore published by Allen Ginsberg and Bob Kaufman. Two gems in the collection are “Inspection” by Rebecca Hazelton and “The American Security Against Foreign Enemies Act” by Lucie Brock-Broido. Both are travel poems that describes the way people are now treated trying to enter our country.

A poem doesn’t have to be political to be a passport for reaching sanity. The truth poets speak to power is simply an outgrowth of their concerns for protecting language from spreading lies and deceit. Majmudar has given us a small reminder.  In “Now” poet Frederick Seidel provides us with words that leave an entire nation sleeping with its eyes open:

The President of the United States proclaims America First.

He doesn’t know Mecca from Milan.