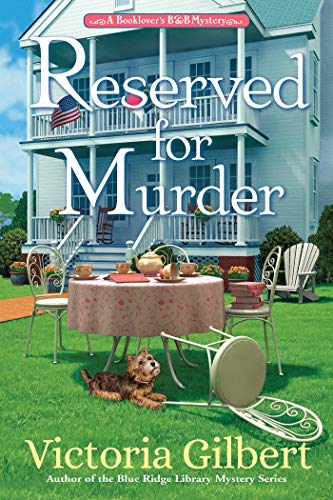 Reserved for Murder, Victoria Gilbert’s new cozy mystery in A Booklover’s B&B Mystery series, is one of the best cozies going.

Gilbert brings her protagonist, Charlotte Reed, to life as a 40-ish widow who inherits her great-aunt’s B&B, Chapters, but does not run around intentionally inserting herself into local murders. That is not to say those murders don’t draw her in, but not by choice. There is no foolish police officer, instead Detective Johnson is a strong female character who recognizes Charlotte’s skills at observation. The two characters work well together.

Charlotte’s weekend is spoken for with several days of welcoming a popular romance writer to the B&B as part of a book tour, and this is where the reader gets to meet all of the suspects, the investigators, and the murder victim. And Gilbert has a bevy of great suspects: Amanda Nobel, the prolific author; and Harper Gregg and Molly Zeleski, both fans of Amanda’s who won a contest inviting them to meet Amanda and be part of the gathering at Chapters.

Dr. Roger Warren, a nonfiction researcher and Scott Kepler, also a nonfiction researcher, both whose criticism of the romance genre quickly run afoul of Amanda’s fans; Tony Lott, Amanda’s handler from the publishing company; and Billy Bradford, the ex-husband and stalker of the victim; Lissette Bradford, who was the president of Amanda’s Fan Club and has many secrets that upon discovery, certainly give reason to see Lisette murdered.

Certainly, a healthy group of suspects—each with a reason, strong or weak, to want Lissette dead. After the first evening’s event at Chapters, the guests leave for dinner, and the next day, Lisette’s body is found in the bay.

Throw into this mix of characters Julie, the owner of the local bookstore and Scott’s girlfriend; Ophelia and Bernadette Sandburg, sisters and fans of Amanda; Ellen Montgomery, Charlotte’s neighbor, a 70-ish ex-spy; and Gavin Howard, a current spy with another story to tell, and the plot thickens considerably!

As Charlotte and Ellen put their heads together to chase clues, Gilbert cleverly inserts enough damning evidence to make any one of the suspects the murderer, and Charlotte and Ellen have to sort through the many clues to weed out all but the true killer.

The story is well laid out, with an interesting aside—a spy story. It should be noted that the spy story is strictly an aside to introduce a male character, Gavin Howard, into the main story.

And what about that second story? Gavin Howard is living at Ellen’s house with a direction from his bosses at the Fed to ferret out the truth about a situation in which Ellen, and Charlotte’s great aunt Isabella Harrington, participated several decades earlier. His direction is to protect Ophelia Sandburg who was an unwitting participant in the earlier situation.

This second story has great potential but weakens as the story progresses until it disappears entirely. Again, it is apparent that the purpose of the second story was to introduce Gavin as a possible, future romance partner for Charlotte.

Gilbert has woven plagiarism, ghostwriting, and burnout into the reasons for murder, making for a deep plot that unfolds well.

Look for the next one in this series—it should be as good as this one.