Requiems for the Departed 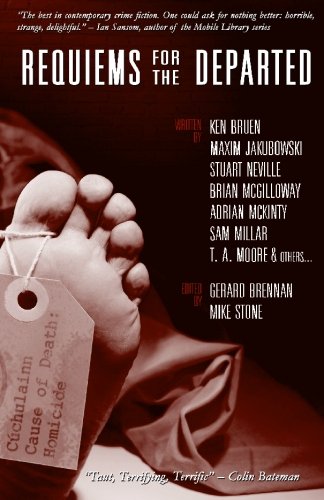 I’m always a little uncomfortable with the incongruity between the terms Irish writer and Irish Writer—between the caricature of the first and the cynicism of the second. This book is a collection of 17 short stories by writers who are not all Irish, but who, in accepting an invitation to contribute, have accepted an invitation to attempt to be either the one or the other. All the stories are “inspired” by Irish mythology and most are contemporary crime fiction.

The stories range between 2,000 and 10,000 words in length and there are three subsections: Ulster, with five stories; Myth, with seven stories; and Fianna, with five stories. Short stories require more discipline in the writing than longer works of fiction— they must have a clear theme, just enough characters to illustrate the theme, and be constantly focused on the theme. Some of the offerings here conform to the strictures of the genre, yet still achieve originality and surprise. And some don’t.

The theme of most of the stories included in the Ulster subsection is revenge—and, mainly, the revenge of women who’ve been wronged by men. The mythological inspiration comes from the Ulster Queens Macha and Maeve, from Cúchulainn and from the story of the Red Hand. With a subsection called “Ulster,” I hoped the fiction wouldn’t get bogged down in clichéd sectarianism and, apart from a few references to “taigs” and “troubles,” it doesn’t.

The stories vary in style, from gritty, urban motifs, to more humorous provincial parodies. Yet in some cases, subtlety is sacrificed for hurried exposition.

For the subsection Myth, the inspiration is gleaned from such Irish fables as the Banshee, King Bres, Cúchulainn again, Tuan MacCarrell, the Children of Lir, and more. This section has more originality. Right from the beginning, the narrative style is more experimental, and the themes are more sinister, more literary, and more brutal. There are a couple of stories in this subsection that are not contemporary, but are set in Druidic and Roman times and provide a distraction from the main “contemporary” mandate.

The Fianna were warrior bands of young men who lived in the forests of ancient Ireland, but who could be recruited by the king in times of war. The final subsection of Requiems for the Departed takes its inspiration from the mythology of this marginalized group, such as the tales of Diarmaid & Gráinne and Tír na nÓg and also, almost inevitably, a seemingly unconnected mention of the story of Saint Patrick. Here, with the exception of the final story, the quality of the writing dips slightly from the previous subsection’s peak but nevertheless retains the ability to surprise.

It is a common saying that when it comes to the genre of crime fiction, all the good stories have already been written. However, the elegant line-up of writers who contribute to this anthology has managed to dispel that flawed truism. The assemblage includes, in alphabetical order, though not in order of appearance, Tony Bailie, Tony Black, Ken Bruen, Garbhan Downey, John Grant, Arlene Hunt, Dave Hutchinson, Maxim Jakubowski, Garry Kilworth, John McAllister, Una McCormack, Brian McGilloway, Adrian McKinty, Sam Millar, T. A. Moore, Stuart Neville, and Neville Thompson.

With talent like that between the covers, which includes a clutch of award-winners, Requiems for the Departed is bound to score big with lovers of the short story, lovers of crime fiction, and lovers of Irish Mythology—surely a winning combination?