Reputation Economics: Why Who You Know Is Worth More Than What You Have 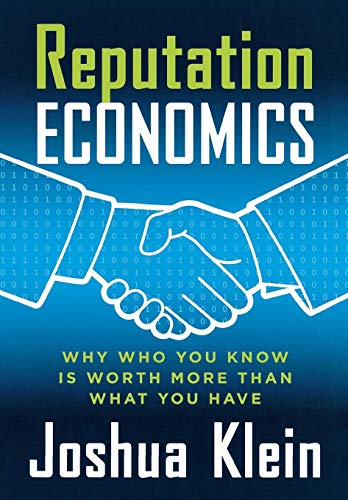 "Perhaps Mr. Klein can get paid for this book in goods with an excellent reputation for traditional value . . . like goats."

There don’t seem to be any memorable quotes about “reputation”—or at least none that fall trippingly off the tongue as they do for other subjects. For reputation there is no: “Neither a borrower nor a lender be” (William Shakespeare, Hamlet), or “In this world nothing can be said to be certain, except death and taxes." (Benjamin Franklin). Or even the wonderful “I hate writing, I love having written.” (Dorothy Parker).

There are lots of quotes about money, and some about economics, but not many about the idea and reality of reputation. Perhaps the famous stripper and vaudevillian Gypsy Rose Lee had some good thoughts on it.

One of the first tasks of writer is to be able to create definitions of new terms and ideas when the time arises. Here Klein has failed miserably. A truly sloppy definition of “reputation economics:” imprecise, lacking context and unambiguous constraints. He’s got to define the terms—the ideas—and keep the reader with him as he explains it all. Klein never wins over the reader.

Reputation Economics appears to be written as one long blog entry, with all the off-handed bloggy phrases and bad stream-of-consciousness activity that makes for poor analyses. With chapter titles such as “A Short History of Money” and “The Rise of the Individual,” often sourced from Wikipedia (not a terrible thing but Klein needs to do better for such weighty subjects), it’s sad to say that this book is all over the place. Written for the beginner and for true believers (who think that digital money will overthrow cash any day now), if you have more than a college degree, stay away from this book.

What are reputation economies? According to Klein, “they’re exchanges that use more or other measures than just financial currency” which are not based on cash. And in a time of the emergence of social networks and online marketplaces a reputation is a very important thing.

If your restaurant or headphones or humidifier is panned by Yelp reviewers, there goes the reputation, your customers, and your revenue. All true, but Klein never explains the issues with paid reviewers, “stacked” reviews, and all the issues that have surrounded seemingly clean, pure, objective reviews which are anything but and are often controlled by companies and random groups, among others. His feet never touch the ground when it comes to objectivity or real analysis.

A reputation on the Internet is important—especially as it translates to the real, analog world—since that’s where the money is, that’s where you secure housing and groceries, tuitions and medical care. Klein mentions Klout.com—a nice service that will drag you far into the Internet vortex if you sign up. He mentions a few others, but leaves out Quora, which is a major player in creating reputations.

Showing again that he doesn’t understand the issues of economy and money, Klein writes “the big economic platforms of the day—the dollar, euro, and yen—are each individually as shaky as they’ve ever been . . .”

Perhaps Mr. Klein can get paid for this book in goods with an excellent reputation for traditional value . . . like goats.