Republic, Lost: How Money Corrupts Congress—And a Plan to Stop It 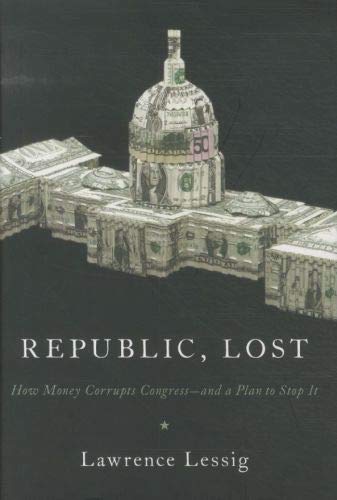 “Could it be that what feeds both ‘dependence corruption’ and excess lobbying is simply overworked Representatives? . . . before we ‘go to war’ over finances and their origins, it might be wiser to recall that since democracy is about representation, simple arithmetic might also come in handy.”

The title is alarmist, the tone polemic, the conclusion odd.

Republic, Lost: How Money Corrupts Congress—And a Plan to Stop It is a book about institutional corruption related to campaign financing. This, according to its author, is “the one issue in this country,” and urgently needs tackling.

Part I of the book delineates the problem under the telling title, The Nature of the Disease. Part II tells of the problem with using examples. Part III elaborates how Congress, and both the left and the right, are corrupt. And Part IV offers solutions.

The present regulatory framework on campaign financing—and not only since Citizens United—is “an engine of influence that seeks simply to make those most connected rich,” contends Lawrence Lessig. What’s more, it does so in subtle ways that do not fall under the conventional definition of corruption. This so-called “dependence corruption” has made weaklings out of the members of Congress—and distrustful souls out of the nation.

Four so-called “policy struggles” are used to exemplify this argument: obesity in children, copyright law vs. climate change, schools’ and teachers’ performance, and the financial system. In all of these cases the scientific evidence clearly points toward the need for regulatory reform. Yet this has failed to be implemented, again and again, for the simple reason that the anti-regulatory reform lobbies are dominant and financially generous. For example, in the period 1999 to 2008, an incredible $2.7 billion USD was reported in federal lobbying expenses linked to the financial sector.

In the history of Congress, lobbying is, of course, not new. It also fulfills an important function with respect to the provision of much-needed expertise: “Most lobbyists are just well-paid policy wonks, experts in a field and able to endorse and guide Congress well.” But professionalization, in conjunction with money, has turned the lobbyist into a different type of supplier. Some of the cash flows are direct, and as such they can be easily classified, and subsequently prosecuted as bribery—if and when discovered. The situation is more complex with indirect cash flows that display a structural or systemic impact—these create dependencies.

What is to be done? Simple transparency, answers Lawrence Lessig, is not enough and can even be counterproductive in that it “normalizes the dependence.” Anonymity is impractical. Limiting private contributions and matching funds via the Federal Treasury would work. Unfortunately all related proposals have failed to materialize.

This leaves committed citizens with no alternative but to “go to war for democracy” and rely, if necessary, on unconventional means such as: running nonpolitical “peaceful terrorist candidates” in the forthcoming Republican primaries to “help break the partisan logjam;” supporting reform presidential candidates such as Buddy Roemer of the Tea Party; and calling for an Article V Convention to change the Constitution.

It is at this stage that the book becomes definitely wacky, with Lawrence Lessig likening the irrational part of his love for his family to the irrational love for his nation and calling the citizenry to arms, because “we should be willing to do whatever we can, the odds be damned, to save both . . .”

And: “However far from my views a member of the Tea Party is, we still agree about certain fundamentals: that it is a republic we have inherited; that it ought to be responsive to the People alone; that this one is not. . . . I stood in the middle of a national Tea Party Convention. I recognized the people around me. They may not have agreed with me about gay rights . . . We certainly didn’t agree about taxes or the need to ‘end government regulation.’ But we were united in this view that this republic can do better.”

I would not know what to make of Lawrence Lessig’s political conversion—not his first—and the same applies to his candidate Buddy Roemer. Mr. Lessig’s assessment is, in any case, inadequate—despite making use of some very good political science research and data.

Yes, there is something deeply distorted (and distorting) in the campaign finance framework currently operating in the United States; and, undoubtedly, lobbying entails structural and systemic risks. But I am not convinced that the causation mechanisms are as clearcut as the author of Republic, Lost concludes. It is possible, namely, that both the uncontrolled increase of lobbying and the growing “dependence corruption” of members of Congress are effects of another cause or variable.

As Lawrence Lessig found out, the growth of out of control lobbying coincides with increasing policy complexity at federal and state levels, and with a greater number of expert committees within and outside Congress. In parallel, the demands on the time of Representatives have increased manifold: They are called on to judge legislative proposals that demand heavy expertise all the while remaining in touch with their constituents back home; must themselves lobby for earmark funds; and they are almost constantly fighting a campaign of some sort. Could it be that what feeds both “dependence corruption” and excess lobbying is simply overworked Representatives?

The number of Congressional Representatives has been fixed at 435 since 1911. That is now 100 years ago—and the complexity of our globally interdependent world has increased some since—an obvious understatement. This is not to say that campaign finance should not be reformed. Indeed it must.

But before we “go to war” over finances and their origins, it might be wiser to recall that since democracy is about representation, simple arithmetic might also come in handy.