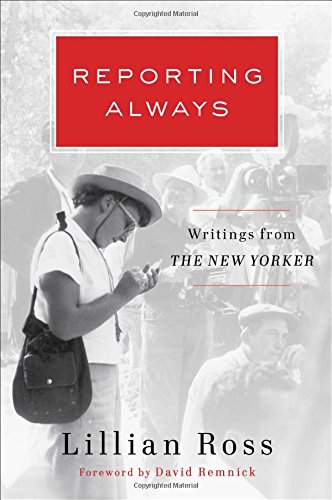 Is there a writer who has not aspired to contribute to The New Yorker? Merely even one piece? That would be a prize. But to have written for this celebrated magazine for 60 years under its famed and awesome editors, and to have begun there more or less by serendipity surely qualifies for a charmed writer’s life.

In 1944, Lillian Ross was writing for a left-leaning New York daily called PM.  The editor of PM, Peggy Wright Weidman, was asked by William Shawn, then the managing editor of The New Yorker, to join their staff. When she turned down the job she wrote to Shawn suggesting he hire Ross, which he proceeded to do.

Ross began writing pieces for The Talk of the Town, the enduring, chatty opening to each issue. Before long she was reporting on personalities and events in lengthier pieces, which expanded her range to include national and international stories; both her shorter and longer stories are well illustrated in this book.

A notable short section in Ross’ Introduction itemizes her “basic rules,” a brief exegesis by this accomplished writer that reveals her approach and serves as precious coaching for all writers. She says she only writes about people who want to be written about, which no doubt kept her friends with her subjects. She urges writers to report only on what they “observe,” what can be seen and heard, and to never presuppose what someone might be thinking (or feeling, one supposes).

She does not use a tape recorder but rather relies on her notes and memory, which she believes gives the material more spontaneity and flavor. What interests her is the subject’s talent and how they uniquely lived their lives and “revealed” their gifts. Her reports are always about living characters and what she calls “present truth.” Perhaps her most important rule is “hold onto yourself” in order to maintain your “innocence.” These insights into writing well also orient the reader to her style when taking in the reports that follow.

The articles appear in five sections with stories from 1948 to 2005. We are offered from five to nine examples in each section (chosen from different decades of her work), which are titled Players, Writers, Youngsters, New Yorkers, and Big Cheeses. Ross was a trusted confidante of writers, actors, directors, athletes, painters, entrepreneurs, designers, beauty contestants, and even small town folks visiting NYC or smart-ass upper east and west side teenagers.

Her subjects are a celebrity pantheon including Ernest Hemingway (also a friend), Robin Williams at age 34, Willie Mays (a great piece written with a NYC fifth grader), Dames Maggie Smith and Judie Dench, John McEnroe, Wes Anderson, Clint Eastwood, Julie Andrews at age 19, John Huston (which led to her book on the filming of The Red Badge of Courage), Federico Fellini, Edward Albee, Lassie, and others. David Remnick, the current New Yorker editor, gives us a Foreword, and he is always worth reading.

Ross’ capacity to observe and make the reader a part of the moment is quite remarkable. But after reading this collection of reports, compressed into a few sittings, one wishes she also had covered world leaders, dissidents, bad guys, and down-and-outs. There is too much glitz and not enough grit. Yet what emerges is discovering once again that what makes for great writing is less the actual subject and more the passion and skill of the writer. And Lillian Ross has had an abundance of those qualities and the exceptional capacity to sustain them for decades.