A Replacement Life: A Novel 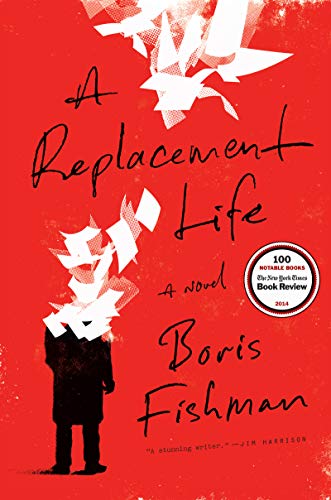 “. . . to make his stories convincing he has to get the details right, and despite the leaps of faith Fishman demands he provides more than enough correct details and well crafted figurative turns of phrase to convince most readers to go along with him—and those who do will be amply rewarded by this multidimensional and handsomely written debut novel.”

It is not unusual for members of minority groups who experience systematic discrimination under authoritarian regimes to view playing by the rules cynically and adopt situational ethics. When these same minority members move to an open and democratic but at the same time foreign and bewildering country their ethical conduct does not change overnight, but their children and grandchildren are more likely to conform to the majority culture’s standards of ethical probity.

Slava Gelman, the twentysomething protagonist of Boris Fishman’s debut novel A Replacement Life, finds himself in just such a generational divide. Like his creator Fishman, Slava was born in Minsk, Belarus, when that country was still a republic of the U.S.S.R., moved to New York with his family as a child, and speaks and writes American English with greater facility than Russian which he hasn’t entirely forgotten.

Slava lives on Manhattan’s Upper East Side and is a junior staff writer at Century, an even more prestigious magazine than The New Yorker, where after three years he has yet to earn a byline and where he starts dating Ariana, the magazine’s fact checker and a former Californian Jewish Upper West Sider. Neither Slava nor Ariana have roommates though market rents in their respective neighborhoods are greater than their salaries; here Fishman demands the first of several suspensions of disbelief that will reward readers willing go along.

When his grandmother Sofia dies unexpectedly Slava travels to southern Brooklyn for the funeral and shiva where he experiences nostalgia for his grandparents’ culture and neighborhood. On the day she died her application form for Holocaust survivor benefits arrived in the mail. As a survivor of the Minsk ghetto and a concentration camp she would have qualified, but her husband and Slava’s grandfather Zhenya, who at the start of the war had been evacuated to Uzbekistan and then fought the Germans as a Red Army soldier, does not.

Zhenya, who has a history of petty fraud, suggests that Slava the frustrated writer write Sofia’s story but change the gender so that Zhenya can use the narrative to apply instead. When Slava relates Zhenya’s proposal to Ariana she tells him, as if stating the obvious, he can’t do it. That should be that, but Slava agrees to his grandfather’s request behind her back, which does not augur well for their budding relationship.

Not that Slava is such a boy scout. His job at Century is to read small town papers and clip humorous typos and double entendres for a humor page; when he can’t find enough real ones he invents rural municipalities and their newspapers and creates his own quotes. Because this is a humor column without a byline Slava’s fabrications are not on the same level as Jason Blair’s at The New York Times or Stephen Glass’ at The New Republic, but Fishman expects his readers to believe that Ariana the fact checker, and Century’s readers never Google Slava’s alleged citations.

Shortly after completing Sofia’s story recast as Zhenya’s Slava gets a phone call from one of Zhenya’s friends requesting Slava fabricate a Holocaust survival story for him too. For fraud to succeed as few people as possible should know about it, but Zhenya the braggart had to tell all his friends, and Slava so enjoyed both the writing process and reconnecting with his roots that he agrees to fabricate stories for other elderly Russian speaking immigrants.

So instead of spending the evenings of the first month of their relationship together, Slava tells Ariana he is staying late at the office to work on a story he hopes will win him his first byline, and instead travels to the Russian speaking neighborhoods of southern Brooklyn to interview Zhenya’s elderly friends and craft false Holocaust stories before returning to Ariana’s apartment late at night and crawling into bed with her. The novel takes place in 2006, and yet Slava and Ariana have remarkably few cell phone conversations or exchanges of text messages.

Listening to Zhenya’s friends’ stories Slava learns how unfair are the criteria for Holocaust survivor benefits. Those who escaped from the ghettos and saved themselves by hiding and/or fighting the Germans are ineligible to receive benefits, but those who stayed in the ghettos, were deported to concentration camps and happen to be in the fraction of one percent of inmates to remain alive at war’s end are eligible. The post-war German government will only approve claims from those who never disobeyed or resisted Nazi authority, despite the hardships the ineligible ones had to endure to stay alive not to mention the lack of compensation for the deaths of their relatives.

Seeing how much Slava enjoys the work, Zhenya imposes a condition for his referrals: Slava must date Vera, the daughter of family friends who stayed in the neighborhood when Slava and his parents moved to suburban New Jersey, whose Russian is better than her English and earns double Slava’s salary connecting Russophone customers with appropriate vendors (read: non-intellectual), wears too much makeup (Ariana wears none), approves of Zhenya’s scheme and is fiercely loyal. Now Slava is not only divided between the American and Russian sides of his psyche but also has competing romantic interests (both of whom are voluptuous).

Slava thinks to himself that Ariana is what results from his grandparents’ generation after a century of American acculturation. So which woman and which cultural side of Slava’s persona will prevail? Fishman’s ending is both surprising and satisfying.

Slava knows that to make his stories convincing he has to get the details right, and despite the leaps of faith Fishman demands he provides more than enough correct details and well crafted figurative turns of phrase to convince most readers to go along with him—and those who do will be amply rewarded by this multidimensional and handsomely written debut novel.