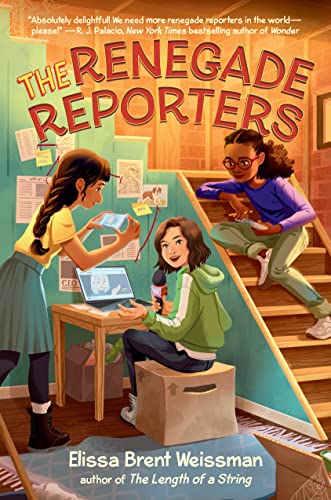 "‘I think they're collecting information about us. Companies do that sort of thing. You should see the data my brother has about visitors to his website.’"

Have you ever wondered why so many software programs are free? Have you read their privacy policies and terms of service, always in small print? And how do they know so much about us when there is no advertising within the software itself?

The Renegade Reporters is one of the most important books for teens and adults. The author tackles online privacy in an accessible and understandable way for a tween audience. She tackles family issues and rivalries that occur in teenagers' lives today with humor and compassion, delving into the minds of those tweens.

The story begins when Ash, the anchor of John Dos Passos Elementary news show, The News at Nine, sponsored by Van Ness Media, catches the gym coach in her office, dancing in her bra. When this photo goes viral, Ash is kicked off the crew. Harry E. Levin, her rival and nemesis, will be replacing her as head anchor. Ash is stunned when she hears this news from her teacher, Ms. Sullivan. "‘Privacy,’ Ash thought, resisting the urge to roll her eyes, because what sort of privacy could you expect in a school full of kids?" Ash invades the privacy of a coach as a journalist and is reprimanded. Ironically, ethical issues about investigating software companies for privacy violations is a recurrent theme in this book.

Ashley Simon-Hockheimer, lead anchor, Maya Joshi-Zacharia, videographer and Brielle Diamond, editor, all 11 years old, had been working on The News at Nine for the past year. Searching for new stories of interest to the rest of the student body and teachers became a crucial part of their jobs. So when Ashley is fired, they decide to create their own news show, The Underground News. Each of their parents gives their approval. Ashley's two fathers agree to let them set it up it in their basement, as long as they show them the content before it goes to press. "Just because we can't report the news at school, though, it doesn't mean we can't report the news. We will call ourselves The Renegade Reporters.”

Ashley is riled up when Harry E. Levin tells her that he's reporting the same news story on The News at Nine that had already been discovered by The Renegade Reporters. He's now trying to compete with The Underground News. Not only that but Van Ness Media, their sponsor, was going to feature him as their number one news anchor. "Ash froze. Maybe she hadn't heard properly . . ."

Ash, Maya, and Brielle begin to suspect that Van Ness Media is playing favorites when they chose Harry because they hadn't disclosed that they were the ones who sponsored The News at Nine and paid for all their technical equipment. "“Yes,’ Ash said. ‘A conflict of interest. Van Ness Media only picked these people because they sponsor things at their schools. It's favoritism.’" They decide to do a feature on Van Ness Media.

Ash, Maya, and Brielle find themselves delving into investigative reporting. Their first task is to visit Van Ness headquarters to seek an interview with Maria Van Ness without first setting up an appointment. So two broadcast journalists, accompanied by a screaming baby Beckett (Ash's brother) and his babysitter, finally set off to Harbor East and enter the lobby of Van Ness headquarters. While Maya shoots photos of the building from different angles, Ash wonders what she would say. "Was she really going to accuse the CEO of playing favorites? Was it too late to turn around?" They see a TV screen in which Maria Van Ness is being interviewed. She states that her products are free of advertising and that's what sets them apart from other free software programs which are bombarded with ads.

Of course, they are refused an interview with the CEO because she's out of town. Ash and Maya, on their way to the bathroom, pass a closed wooden door. They open it and slip in quietly. What they see and hear is totally unexpected. Something fishy is happening behind the scenes at headquarters. They're looking at a map of Federal Hill. Are they really tracking all their student's IDs as well as their locations? Are they also tracking and owning their projects? The Renegade Reporters would make it their business to find out. And here is where the suspense begins.

Ash, Maya, and Brielle begin to feel that they are being watched by Van Ness Media trackers. "I think they're collecting information about us. Companies do that sort of thing. You should see the data my brother has about visitors to his website." They are shocked when they see all the data that Dev is able to muster about his customers, when he's just selling student guides for high school courses. Maya offers to do further research on how companies track personal data online. Brielle decides to find out more about the Van Ness Media software. She tries to discover what users actually agree to and how their personal information is stored. It's left to Ash to research Maria Van Ness herself.

They come up with a brilliant plan. They will go underground and set up a false account with Van Ness Media. Then they will find a fake person, give him a name and have him sign up for an account under his name. They will check if Van Ness Media is tracking his location. Their plan is successful until Van Ness Media finds out and locks them out of Van Ness Movie Maker. They are furious and confront the principal who tells them: "‘You are in sixth grade now. It's time to start taking responsibility for your own actions. Last year, you tried to blame the incident with Coach Kelly on everyone but yourself. Now you're trying to blame this on Van Ness Media.’"

Read the book to find out how The Underground News takes on one of the biggest software companies in the USA and exposes them for false advertising and violating the privacy of their customers and users in an underhanded way.

Brent Weissman offers children and adults a thought-provoking novel on the issues of online privacy. She makes a statement about the need for kids to be proficient in digital literacy and also leaves room for further thought and discussion. An award-winning book that will linger in the reader's mind for months to come.