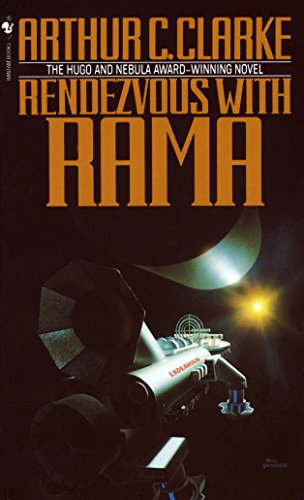 Harcourt Brace Jovanovich, 1973By the end of the sixties Arthur Clarke and Isaac Asimov were constantly asked who, between them, was the best. What could have become a childish battle of egos became an elegant way out. This is how the “Clarke-Asimov Park Avenue Treaty” was born.With good humor the agreement was always honored. In 1972 the treaty was announced in writing for the first time, when Clarke published the book Third Planet. On the first page he wrote: “According to the Clarke-Asimov Treaty the second best scientific writer dedicates this book to the second best science fiction writer.”They always considered themselves friends, but either because of healthy competition or the need to put some order in his creative source, Clarke created three laws, without, of course, any direct connection to the laws of robotics described by Asimov. Clarke’s Three Laws deal with man’s relationship to technology:2-     The only way of discovering the limits of the possible is to venture a little way past them into the impossible. “To read computer manuals without the hardware is as frustrating as reading manuals on sex without the software.”Extremely creative topics, humorous and inspiring observations, and intelligent plots fill his more than 70 books, which undoubtedly is the reason for the more than 50 million copies sold all over the world before his death in 2008. Clarke has been honored with the greatest prizes in science fiction: Hugo (presented by readers—twice), Nebula (offered by writers of the genre), Grand Master (Science Fiction Writers of America), Kalinga (Unesco), AAAS-Westinghouse for scientific writing, Bradford Washburn, and one of the most coveted by science fiction authors, the John W. Campbell.Clarke’s bestsellers include: Childhood’s End (1953), 2001: A Space Odyssey (1968), Rendezvous with Rama (1973), Fountains of Paradise (1978), The Songs of Distant Earth (1986), and The Hammer of God (1993).From 1988 on, Clarke decided to change his literary career: Cradle was launched as the result of a partnership with Gentry Lee. Even though a NASA scientist, sci-fi writer, and computer game designer, Lee’s writing style was completely different. This was noticeable in all of their works written together. Clarke confided to his readers in an online chat that the creative process with Lee was: they discussed an idea, Lee wrote the book, and in the end Clarke made suggestions. It is obvious why the “Clarkean prose” ended up being diluted. to the writing felt like an amazing lingering perfume—after the gorgeous woman has left the elevator.Don’t get me wrong: Gentry Lee is a “good” sci-fi author, but to sign a book under Sir Arthur Charles Clarke’s name, you have to be a “great” author.Rama, as Rendezvous with Rama is known amongst Clarke’s fans, starts with Earth being struck by two meteors, in 1908 and 1947. No big deal, since they hit uninhabited areas. But the incident served one purpose: it proved that humankind had a proverbial glass roof.The world leaders decided that “next time” they would be forewarned and created a sophisticated radar system that would detect moving objects in deep space as small as a sedan. It was then, when mankind opened its eyes to the sky, that it realized that Rama was coming.  A cargo ship was, well, not exactly nearby if you consider astronomical distances, but close enough to change course, intercept the “alien spacecraft,” and take a good look. As soon as they landed on Rama’s exterior and gained access to the airlock, the crew realized that they would still have to negotiate their access through another airlock. And yet another.Despite Clarke’s quirkiness with numbers, what follows could be considered a course on how to write scientifically sound sci-fi. The result, furthermore, is literature that contains the perfect equilibrium among escapism, entertainment, and credibility with a mindboggling ending that surely rocked the foundations of sci-fi storytelling.