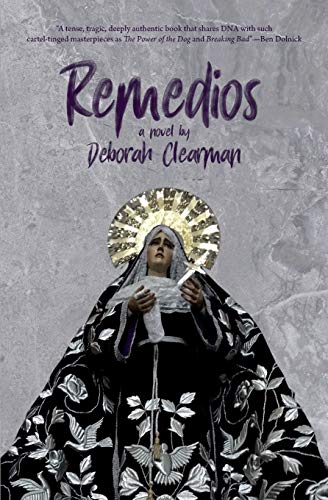 “Readers will find it as difficult to leave the characters in Remedios behind as they will find this haunting novel one they are grateful to not have missed.”

Deborah Clearman begins her new novel Remedios with a storytelling scenario that is difficult to top in terms of creating instant tension. She puts a decent family together with a drug cartel. It is virtually impossible not to watch the ensuing tragedy unfold.

Fernando Granados teaches at a university. He is a devoted husband and father. He is also in debt to the local loan shark, known as the Rattlesnake. He comes from a big family and has many children with his wife Sandra. Fernando’s motivation in borrowing money was neither selfish nor venal:

“But it wasn’t love of money that had gotten him into his current jam. It was love of family, wanting his children to have rooms of their own and not have to sleep with their parents and uncles snoring beside them.”

Into this precarious situation comes Memo Galindo, a childhood friend Fernando hasn’t seen in 30 years, appearing as if out of nowhere. Shortly after arriving, Memo offers a solution to Fernando’s financial woes. He proposes that Fernando allow Memo to build a meth lab on the property Fernando and his extended family own outside of town.

As part of the arrangement, Memo will live in the Pink House, an unused home on the property. When Fernando’s wife drives Memo there, the sexual tension between them is immediately sensed by Memo:

“Memo had a strong feeling that she wanted him to kiss her. The idea intrigued him, but he decided to let her wait.”

Clearman succinctly conveys that this is a man who is in charge, to complete and cruel effect. He kills without hesitation. His evil is calm and reasonable and seductive. Yet even this villain is given texture by Clearman. His wife and children, the reader learns, were murdered by the cartel. And the reader is with Memo when, as a young man, he suffered unspeakable horrors at a training camp for the special operations wing of the army.

Many of the chapters have dates stated in their heading, sometimes including days, sometimes with just the year of the action in that section. The timeline of the story toggles from past to present. Included in the unfolding are vital insights into Fernando and Memo’s relationship when they were boys in school who met on the soccer field. Indeed, Clearman presents all the relationships in her story with urgent intimacy that demands (and earns) the reader’s unwavering attention.

The personal trials of this family play out around and within the country’s civil war during the 1980s, the unending drug wars, and the ongoing corruption of the police and the Guatemalan army. There is ample horror to go around, the scenes of which are rendered by Clearman is prose that is, with its brutal realism, almost torture to read.

Clearman changes the point of view among the chapters to shift focus on each of the main players. Fernando and Memo are given their individual voices, and so is Sandra, who begins an affair with Memo. That her father is a captain on the town’s police force only adds to the relentless apprehension in the novel.

Fernando and Sandra’s oldest son Felix is also a primary character in Remedios. A young man on the threshold of adulthood who is searching for a path, he is a prime target for Memo’s manipulative charm. His “Tío Memo” (Fernando, upon hearing this, wonders when his kids started calling Memo “uncle”) offers him a job as a chemist in the meth lab, the cover for which is that they are making cleaning supplies there.

Age-old betrayals and desires for revenge are mainstays in this novel, as are questions of loyalty and courage and sacrifice. And in this world of almost constant terror, Clearman offers words of piercing poetry that can stir the soul. Fernando’s thoughts, in reflecting on the widening chasm in his relationship with his wife, quite simply and quite agonizingly portray the heartbreak of loss:

“They’d been like inmates on death row since the accident; he knew that one more wrong move would mean the end of their marriage. He couldn’t bear that.”

Readers will find it as difficult to leave the characters in Remedios behind as they will find this haunting novel one they are grateful to not have missed.