The Remains of Love: A Novel 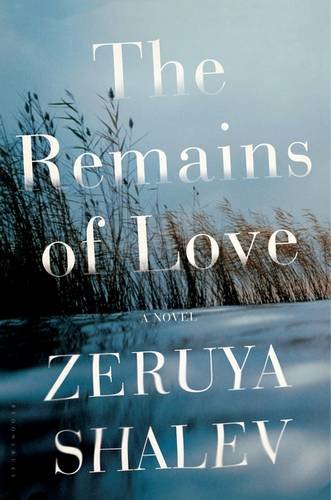 “. . . readers prone to depression might consider acquiring a prescription for antidepressant medication before attempting to read The Remains of Love.”

One way to read Zeruya Shalev’s fifth novel The Remains of Love is as a midrash on Philip Larkin’s poem “This Be The Verse,” that is, as an intergenerational psychological portrait of a family and the neuroses that each generation bequeaths the next.

This novel is less depressing than Ms. Shalev’s previous and perhaps strongest novel Thera, which is told entirely from the perspective of a single emotionally distraught first person narrator. By contrast, in The Remains of Love the perspective of the third person narration alternates between three protagonists, all of whom experience death wishes at various points, but by shifting between the characters the emotion is diffused and less intense: its readers will experience three quarters of Thera’s gain and only two thirds of its pain.

Nonetheless the book is an emotionally powerful one, and readers prone to depression might consider acquiring a prescription for antidepressant medication before attempting to read The Remains of Love. The clinically depressed should avoid Thera entirely.

The use of multiple perspectives in a psychological portrait of a family is reminiscent of Yael Hedaya’s novel Eden (also reviewed in NYJB), but had Hedaya written The Remains of Love she would have devoted entire chapters or subchapters to secondary characters, and the novel would be considerably longer. Also Hedaya, who maintains a greater clinical and aesthetic distance from her characters, uses dialogue more extensively than does Shalev whose introspective characters prefer to reveal themselves in long interior monologues.

Shalev, who is also a poet, makes frequent use of figurative language in her prose, and some of her most lyrical passages take the form of nearly page long run-on sentences that will please readers of dense stream of consciousness writing on the one hand, and offend traditional formalists and grammar police officers on the other. She also eschews quotation marks forcing the reader to pay close attention in order to discern who is speaking.

The Hebrew title of the book translates as Remnant (or Remains) of The Life, a phrase that in one form or another reappears throughout the novel and which refers to the diminishing number of days that remain in the life its elderly protagonist Hemda Horovitz whose health is failing, and to the midlife crises of the other two protagonists, Hemda’s adult children Dina and Avner, who must each decide how to make the second half of his or her life meaningful.

Hemda was born in the middle of the first half of the previous century the daughter of pioneers on a kibbutz on the shore of Lake Hulda (which was drained to produce more arable land in the early 1950s) in the northeast Galilee. Her mother, who worked in America as a fundraiser and liaison to the diaspora Jewish community, was absent for years at a time, and her father was a stern humorless disciplinarian. Perhaps not entirely humorless: one of the meanings of the Hebrew word hemda is the brief pleasure associated with orgasm.

As Hemda’s mother was unable to love her (or only from afar), Hemda withheld love from Dina and instead showered it on Avner who found it so suffocating that when his first girlfriend Shulamit gave him the ultimatum of marriage or breaking up he chose marriage in part to get away from Hemda. Dina’s first boyfriend was attentive and solicitous in exactly the ways that Hemda wasn’t, which Dina found so uncomfortable that she dumped him for Gideon, a self-focused and self-assured photographer.

All three protagonists have narcissistic tendencies and make emotionally driven decisions without regard for the consequences on family members. Although Hemda was a daughter of the kibbutz she felt she didn’t fit in, and when her beloved Lake Hulda was drained and its dried out bottom burned she felt she had to get away, forcing her frail immigrant husband and young children to move with her to Jerusalem.

Four decades later when Avner visits his mother in the hospital he looks behind a curtain separating his mother from the other patient and witnesses the last tender moments of a dying man and his beloved. Avner is so moved by the scene that he starts stalking the surviving woman and resolves that he will not stay in his loveless marriage his young sons notwithstanding.

For decades Avner has been substituting food for the love missing in his marriage resulting in a belly so large he cannot see his penis. By contrast Dina is thin and afflicted with bulimia.

In their professional lives Avner is a human rights attorney whose successful cases are few and far between and appreciated only by his Arab clients (and his author who shares his progressive worldview), and Dina is an academic historian who after many years of dividing her time between home, teaching, and research still has not finished her doctoral dissertation.

She has made a conscious effort to give her daughter Nitzan all the love she never received from her own mother. Nitzan’s fraternal twin brother was stillborn, and now that 16 year-old Nitzan is focused on her boyfriend and has emotionally withdrawn from her mother, menopausal Dina yearns to have another child and decides to adopt despite Gideon and Nitzan’s objections.

This review will not reveal whether Avner and Dina follow through with their decisions and destroy their marriages, but it is worth pre-medicating to find out. The Remains of Love is recommended to readers who enjoy psychological fiction about family dynamics written in dense prose. Philip Simpson’s translation probably feels natural to British and Commonwealth readers but may seem a bit formal and reserved to American readers.