Religion and the Rise of Capitalism 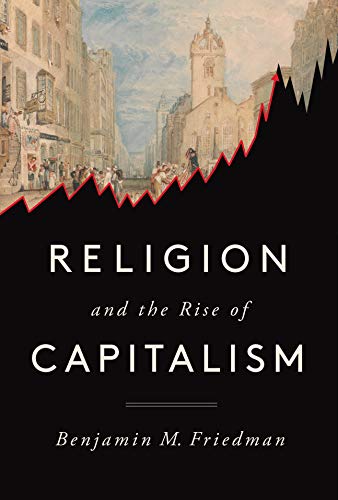 Do you want to know why many of the least affluent Americans support politicians who struggle to lower taxes for the rich and cut what they call the “death tax” on the assets that billionaires seek to pass on to their families?

And how is that many self-professed followers of Christ oppose government aid to the poorest among us? And why are many Americans less enthusiastic about welfare programs than Europeans? These and other paradoxes are analyzed in this thick book by a former chair of the Harvard economics department.

Professor Friedman analyzes how religious faith has shaped economic thinking. The founders of modern economic thought such as Adam Smith and David Hume developed their views in the context of the 18th century Enlightenment. They and many Enlightenment intellectuals did not look to religion for guidance on economic issues such as the division of labor and  free trade. Still, religious ideas that emerged in previous centuries were widely accepted both in Europe and the United States. John Calvin’s teachings about predestination may have inspired people to work hard. Sociologist Max Weber reported that Calvinism encouraged capitalism. Since everyone’s fate is predetermined, if you could accumulate wealth, this might signal you were among the Elect.

Friedman and other scholars have disputed Weber’s chain of reasoning. Lutherans were not Calvinists and did not believe in predestination. In any case, Protestant views on predestination mellowed by the late 18th century. Still, the overall impact of Protestant thinking left many intellectuals and the broader public in the British Isles rather pessimistic about the prospects of humankind. John Stuart Mill forecast a steady state with zero growth and no other form of progress.

American thinkers and the public were more upbeat. In England too many people had to share too little land. Not so in North America. Few American Protestants accepted that our fates are predetermined by God. Instead, many or most trusted that individual initiative could improve life on earth. Some added, however, that God’s blessings could help individuals become wealthy. It was no disgrace to be affluent, though poverty could be one’s own fault. Many if not most evangelical Christians accept that we should live expecting that the millennium will come, perhaps sooner rather than later. Meanwhile, many (such as former Secretary of State Mike Pompeo), do what they can to flourish in this life.

Americans trusted in progress. The country’s  combination of physical expansion and technological advance helped to deliver on this expectation. “Far from being immiserated,” as Karl Marx predicted, “America’s growing workforce doubled its standard of living roughly once every forty years over nearly two centuries.” While this claim by professor Friedman may be valid for parts of the last two centuries, detailed studies show that incomes for most Americans have stagnated since the 1980s. Under President Ronald Reagan inequality rose so that America’s wealthiest 10% possessed half the national  income. In 2020 the OECD reported that the richest 10% owned 79.5% of the country’s wealth. For decades the wealth gap between Blacks and whites also increased. White as well as Black life expectancy fell under President Trump. These trends make it meaningless to make assertions about living standards without discussing the particulars of class and race.

If Friedman has gone back to the 1500s, he might have found another religious force that  shaped economic life. This was the view expressed by Martin Luther and soon by other reformers that the Bible is God’s word and that everyone should read it for themselves. Soon  Luther reneged. He insisted that everyone accept his interpretation of scripture. Luther backtracked on many points, but he planted the seeds for three revolutions that have shaped the Western world: demands for mass literacy, free thought, and respect for the dignity of every individual.

These demands shaped life for all of Western Christianity, because Catholics as well as Protestants came to accept these principles. This outlook influenced economics as well as ethics and religion. About these principles, however, Friedman says little or nothing. Literacy, free thought and expression, and human rights are not even mentioned in his index.

Religion and the Rise of Capitalism will educate most readers about the many religious outlooks and sects that have impacted economic thought and life in Europe and the United States. After 500 and more pages, however, the reader may wonder whether all the theological disputation really had much effect on whether coal miners dug every day, whether farmers strove for better yields, and whether bankers or business owners consulted scripture when they decided how to deploy their funds.