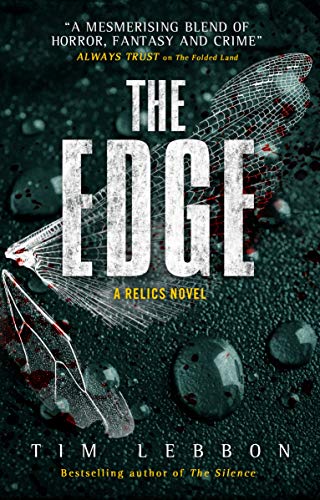 “The long-awaited third novel of the Relic series is here. The Kin are now revealed to the human world, cameras have captured their images, and who knows where that knowledge will lead?”

Vince was a relic hunter, paid to find supernatural souvenirs for rich collectors—a unicorn’s horn, a griffin’s claw. He did his job well until he discovered supernatural folk still exist. When he finds an imprisoned fairy while humans bid for the privilege of making her a trophy, he becomes the Kin’s protector instead of their hunter.

Now he’s a prisoner in to the Fold, a land existing beyond the dimension of human time where the supernatural should’ve found protection and peace. Instead, they’re still being hunted—by the fairy Grace who brought them there and made them her prey.

“The sun rose and fell, the dark skies speckled with stars he did not know. The only certainty was that there was no escape. It wasn’t at all like being turned around or misled. It was simply as if this was the whole world and there was nowhere else to go.”

Also in the Fold is Mallian, the half-angel who wishes to reveal all Kin to the world and bring about supremacy over humans. Mallian’s attempt to subdue Grace and subvert her power to his own failed, and now he lies as an inert body in the Fold.

“Mallian could not move. For a creature so strong and proud, it was the ultimate nightmare. He might be trapped and withered, defeated and dying, but he was still a monster.”

His mind is also still at work, however, plotting and planning his escape.

In the human world on the other side of the Fold, Angela Gough mourns the loss of her lover, daring to hope he’s still alive.

“He had been gone for two years, but he was as known to her now as he ever had been, as if her sleep renewed memories of him and made them fresh again.”

Angela is now guardian of her niece, Sammi, who is struggling with the knowledge that she possesses supernatural powers. Still on the run for being accused of the murders Mallian committed, Angela and Sammi come to a deserted town called Longford.

Forty years ago, the government used Longford as an experiment that went terribly wrong. They killed all the occupants, including three of the Kin who lived there, then flooded the area. Only one person survived, a half-supernatural boy named Bone.

Now the waters covering Longford have receded and the town is once again visible. The three Kin still live and are freed from their underwater prisons. Still infected with the, they begin attacking humans they find.

When Grace discovers a way back into the human world, Vince and Mallian escape as well. Vince is reunited with Angela, and Mallian puts his plan into action, intending to capture Grace, force her to relinquish her power, and bring about the Ascent of the Kin and the destruction of humankind.

“We’ll rise ascendant,” Mallan says. “We’ll be special again. Standing against the humans is the way.”

There’s a good chance Sammi can stop him if she can learn to control her own powers in time. Otherwise, Vince, Angela, Bone, and the rest of the world may find itself ruled over by a power-mad half angel.

The long-awaited third novel of the Relic series is here. No doubt, those who have read the previous novels have been awaiting this entry in the series, and are glad it has finally arrived.

After a second chapter recap for those new to the series, the story begins in the Fold where Vince is struggling to survive, the only human in a land ruled by a cruel and hungry fairy who sees her own kind as nothing more than prey.

Though this is bad news for Vince, it at least assures the reader he survived as the ending of the previous novel, The Folded Land, left his fate in doubt.

This novel introduces Sammi, Angela’s niece, who is discovered to possess fairy blood and is believed to be the one who can stop Mallian from carrying out his destructive plan—if she can fully develop her powers and learn to control them before it’s too late.

Since most of the characters were introduced in previous novels, the descriptions in this one are brief. As would be expected when a creature desiring world domination exists, there is destruction and violence on a grand scale when it happens. Major characters die in bloody, painful ways, as do members of the Kin, while the survivors must put their trust in a teenage girl whose powers are still developing.

The end is nothing one expects. Of course, it isn’t really the end because it begs for another story. The Kin are now revealed to the human world,  cameras have captured their images, and who knows where that knowledge will lead?