Relentless: The Stories behind the Photographs (Focus on American History) 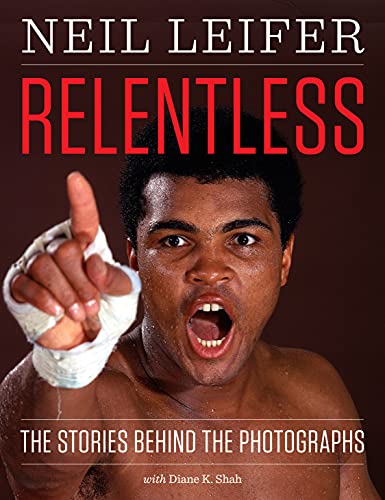 Neil Leifer discovered "a camera could be my ticket to everywhere. A kind of magic carpet . . . to anyplace I wanted to go." That camera took him to fascinating places.

Leifer “ended up taking pictures of everyone from presidents and popes to movie stars and murderers”—some of the most famous and infamous people on the planet.

“And almost every one of those pictures comes with a story.” Relentless relates those stories.

Leifer was a prodigy with two Sports Illustrated covers by age 18. Relentless is his professional photojournalism autobiography, describing what it takes to make great photos. While telling the story behind some of the most iconic, impactful, successful photos ever, he also reveals some setbacks, for not everything worked.

Leifer writes that a picture “can tell a whole story about its subject, tell it vividly and with tremendous economy.” He adds, “There is also something a photograph—even a great photograph—can’t show: the story behind the picture, the people and circumstances that came together in that one-five-hundredth of a second when a shutter was snapped and an image was frozen for all time.”

How many times has one seen an extraordinary photo, sometimes in a newspaper, but more often in a magazine, and wondered how the photographer could create that image? Relentless goes behind the scenes, teaching how such extraordinary photos are created.

Beyond being relentless, attributes needed to excel at photojournalism include:

Successful photojournalists excel at the essential entrepreneurial persuasion skill of selling editors to give them the assignment; financial support: film, processing, travel budget; and necessary press passes to access the events.

Leifer writes, “Photography always was, and still is, an intensely competitive, sharp-elbows business, marked by constant fighting—even with colleagues and close friends—for position, credentials and display space . . . You did almost anything necessary to get the assignments you wanted and the shots you needed . . .” The most coveted shots, the shots that the photographers most need, are magazine covers.

The author had the good fortune to work at a time that “surely was the Golden Age of magazines, a time of great prosperity and opportunity for photographers and journalists. We had freedom to travel the world, to take big chances, and to make them pay off.”

He was paid top dollar for his photos and was also the beneficiary of extraordinary budgetary support. As he writes, “My timing was perfect. As TIME, Inc. grew into the largest magazine company in the world, I got to work for some of the most successful magazines in history—Life, Sports Illustrated, TIME, and People. Over the next 30 or 40 years, SI and TIME went from using color photography on the cover, but only sparingly inside, to being famous for late-closing color throughout. Money was no object. If I needed a camel, TIME, Inc. would have paid for one.”

A pictorial history of the last half century of culture—sports, politics, and entertainment—Relentless delivery shows how photojournalism is multifaceted, requiring extraordinary entrepreneurial initiative, persistence, and hard work. The author asserts, “More than my photos, it was my determination, ambition, street smarts, and some corned beef sandwiches . . . that got me in the door at TIME, Inc.” where he pitched his Stage Door deli delivery customers.

A most rewarding read, Relentless chronicles an extraordinary body of photojournalism work, for as baseball legend Yogi Berra commented, “Neil has taken some of the greatest photos you’ll ever see, even if you’ve seen them before.”

Stephen Roulac PhD has held sports editorial positions in newspapers, served as Editor-in-Chief and Publisher of national publications covering running and cycling, and competed at the national and international level in track and cycling.