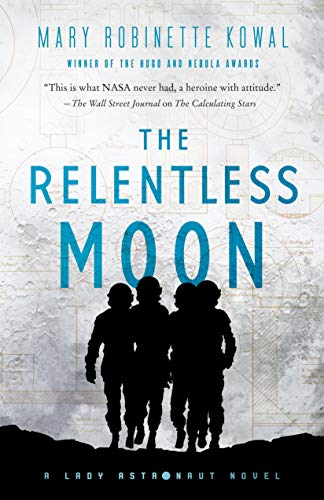 “A touch lighter on the hard science of space flight and a lot heavier on intrigue, new and old readers will find themselves quickly immersed in this complex alternate history of the US’s space program.”

With the Mars expedition still en route, humanity continues to struggle on Earth. How are resources best allocated? Should people, especially the poor, be left to starve while governments invest in the spacefaring tech that will eventually save humanity? Or should their focus be kept local, fixing the neverending problems caused by the meteor impact?

Astronauts fall ill, Elma’s husband Nathaniel the first among them. Equipment malfunctions at an alarming rate. Nicole must juggle her husband’s political aspirations with her own career. But when a routine trip to the lunar colony goes south, starting with a sabotaged shuttle and ending with power failures and bombs, Nicole must unravel the Earth Firster in their midst before the moon colony is destroyed, and Earth’s space program along with it.

The Relentless Moon is another strong installment in Robinette Kowal’s Lady Astronaut series. After two books with Elma York, Nicole Wargin’s perspective is fresh and dynamic. The reader gets to see her “Swiss Finishing School” spy skills in use, primarily on the moon, where the technology aspects of the writing blend seamlessly into the character interactions.

Men are still frustratingly (but accurately) “in the way” throughout the book, but it is a delight to watch Nicole maneuver around them, especially as stakes on the moon heat up. The book does not shy away from discussing the double standard in appearance, either, especially at society functions:

“Mr. Vann was yet another flaccid middle-aged white man with his glittering wife in tow.”

Racial tension is still at the forefront as well, and the book makes a strong effort to remind the reader of the equality and equity issues facing people of color during this time frame. All three books in the series have spent time exploring the implicit and sometimes overt bias of their white female leads, and how dangerous that bias is to the Black men and women they work with.

Personal demons loom large for Nicole, though hers center around the eating disorder anorexia nervosa, instead of Elma’s anxiety. Although not a central focus, Nicole’s skipped meals do keep her from activities and several life-saving activities on the moon. It is notable that she struggles with anorexia but in no way overcomes it during the course of the book. Her friends rallying around her to help and her growing awareness of the impact of skipped meals, gives a strong authenticity to the representation of the disorder.

“I sat down at my desk with a tray from the cafeteria. Following my usual overreaction, I had filled it with mounds of mashed potatoes, boiled greens, curried lentils, chicken parmesan, and two types of cake. Recognizing a cycle and being able to stop said cycle are not the same thing.”

“For my next demonstration of control, I would eat a reasonable amount of food.’

Despite the violence from Earth First that increasingly turns from property destruction to human injury and death, bits of humor do remain in the series. In particular, intimacy between partners is always included in amusing snippets that help keep strong reader investment:

“Goddamn it. We would have such good sex if I were home.

With the change in main point of view character to Nicole, The Relentless Moon keeps the series fresh with a more focused look at Earth First and Lunar Colony dynamics. A touch lighter on the hard science of space flight and a lot heavier on intrigue, new and old readers will find themselves quickly immersed in this complex alternate history of the US’s space program.