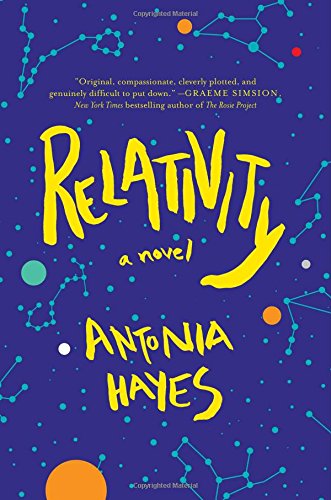 “Relativity is a wonderful read . . . well written, sometimes lyrically so, well plotted and not afraid to enter some of the grittier territory of complex human relationships.”

Relativity by Antonia Hayes is a wonderful read. Hayes deserves a wide audience for this book. Relativity is Hayes debut novel, well written, sometimes lyrically so, well plotted and not afraid to enter some of the grittier territory of complex human relationships. One of Hayes’ singular achievements in this work is her non-judgmental stance and balanced voice.

For protagonists, 12-year-old Ethan, his biological father, Mark, and his single mom, Claire, sometimes explosive, sometimes tender, often hard-to-read shifting points of view have the ring of truth. Indeed they should, for as author Hayes says in interviews the novel’s impetus is largely based on autobiographical fact but the characters and evolving plot are fictional. The novel is set in Sydney Australia, Hayes’ hometown although she now lives in San Francisco.

Another character omnipresent in the novel is ideas created from theoretical physics and cosmology. Hayes’ writing of complex abstraction is masterful. By having, albeit a remarkable 12 year old articulate his understanding of these ideas, she makes them accessible to a wide audience.

A tattoo on Mark’s arm illustrates the interaction between science and this troubled family, ‘E=mc2’: Ethan equals Mark and Claire. Ethan, a brilliant and precocious boy fascinated by physics, Mark, a mysterious figure in Ethan’s life until he is 12, and Claire, a professional ballerina, who ends her performance career to care for her son.

No other spoilers in this review for that would mar your reading of this compulsive, compassionate, and intelligent novel. It grabs you from the jarring opening page and on the last page you gasp at the fitting paean of appreciation for the force of gravity and how Hayes links the implications of physics to the plot.

“Gravitation shapes our universe. Forms tides, heats planetary cores. It’s why fragments of gravitational matter clump together into planets and moons, why stars cluster into vast, rippling galaxies. Earth isn’t going to crash into the sun, the moon won’t collide with Earth—gravity keeps them safe in orbit. It always attracts and never repels; it brings the planets back.

Gravity is insistent. It firmly stands its ground. We never stop accelerating toward the center of the Earth at 9.8/s2. That curvature in the fabric of space-time is a phenomenon we experience every day, an invisible experience we all have in common.”

Light years from the rarified conceptual realm of scientific ideas, Ethan’s family is mired in hurt, excrutiating guilt, and a combination of hate and love not yet understood or clarified. Microcosmic and macrocosmic perceptions of human experience do not align—yet.

“Claire got dressed. Her head was full of contradictions, as though each hemisphere of her own brain were battling some civil war. Confusion left her with a strong desire for solitude, to be left alone with her conflicting thoughts. She felt completely disorientated, questioning her entire life. What if her heart had reshaped itself around a lie? Part of her was angry . . . another part of her utterly distraught.”

Ethan, a child on the cusp of adolescence, is the perfect vehicle through which the story unfolds. We learn at the same time he does the mysterious twists of family history, burial and reframing of tortured memories, a family constellation torn apart.

Gravity does not operate the same way in this family constellation as it does on a universal scale; the stars do not align, at least not on the surface. But at the quantum level gravity and relativity are present although to the untrained eye particles heave and bubble like chaos itself.

Hayes invites us to look deeper into the quantum level of her characters’ psyches. Our clue to this interpretation is Ethan’s pet rabbit named, Quark. As Hayes explains, quarks are elementary particles and fundamental constituents of matter. Quarks combine to form particles called hadrons, the components of atomic nuclei.

The matter that constitutes stars is the same matter firing neurons in our brains. At some level Ethan is already the space-time traveler he strives to be. After all, the title of the novel is Relativity.