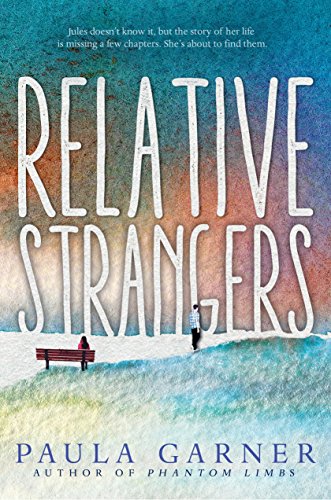 Jules Davis, a high school senior, loves her two best friends but envies them, too. Gab lives in a huge house with two adoring parents and a brother; and Leila, though not as wealthy as Gab, shares a loving family. Jules is stuck with a standoffish mom who is more interested in painting than her daughter.

On the yearbook committee, Jules needs a photograph of her as a baby to accompany her graduation photo. He mother keeps putting her off, so one day she digs into her mom's closet finding a box containing pictures of her as an infant with more after she was about two. She also discovers is a photo of a man holding her just after birth. A man she has never seen before.

Seeing these sets off something in Jules. She wants to find out not only who the guy is but why there are no pictures from infancy until she is a toddler. Her mother is uncommunicative and never divulges information about her past, but Jules needs answers.

She is furious to learn she was placed in a foster home during that gap in time, while her mother was in rehab to gain sobriety. Why hasn't she been told this? Among her mother's belongings is a paper naming the family she lived with for 18 months. Jules, determined to find them does a computer search with the help of Leila and Gab  and locate Luke Margolis, her "big brother."

Jules and Luke correspond, and when they meet she is swept away by him. Luke is perfect; he's not only handsome, but he is kind, compassionate, and thrilled to connect with her again. They go to Jules's favorite cafe' for coffee where her friend Eli always slips her a favored chocolate croissant.

Luke tells her: "I'm so glad you found me," he said. "I always wanted to look for you, but my mom wouldn't let me. She was worried it would disrupt your life, and maybe you didn't even know you were in foster care."

The next step is meeting her foster parents who instantly envelop her with a love she never received from her mother. Her thoughts become confused. How could her mom take her away from this family who so clearly cherished her? What would her life be like if she had been adopted by them? "But running through these other versions of reality also meant thinking about the impact of this reality —not knowing my own mother. Not having Gab or Leila or Eli. Not knowing a china pattern from a Chinet plate.

"Would I have felt in the other reality as I do in this one? Like someone who didn't quite belong, someone who always wished for something different? Maybe I would have obsessed about my real mother and the life I'd missed? That sounded about right if I was honest. Maybe I was just a chronic malcontent. Nothing was  ever enough."

Paula Garner gets to the heart of teenage angst, and not the usual emotions shared by most teens. Imagine realizing secrets withheld about a part of your life which you cannot remember? Living a life feeling you are an accident and don't really fit in?

Written with modern-day young-adult vernacular as well as common scenarios of today's youth creates an authentic novel. The characters are substantial making it  easy for the reader to relate and empathize with the situations of all involved. Heartbreaking at times, Relative Strangers is a well developed coming-of-age tale offering a favorable conclusion with food for thought