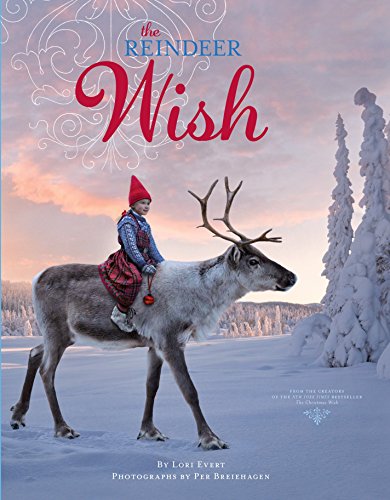 Children's picture books with photographs are often jarring and quickly dated. Not so with The Reindeer Wish.

Anja is a little girl who lives in the snowy mountains in the far, far north. "Anja had many friends at school, but when school was out she sometimes got lonely. She would have liked to have a brother or sister; but mostly she wished for a puppy. Every week, she wrote a letter to Santa, put it in the postbox, and hoped for the best."

One day, with the help of a magical cardinal, Anja discovers a baby reindeer who has been abandoned and will starve or freeze if she doesn't take him home. Her parents allow the reindeer to stay in the little hay shed. Anja proves to be a good reindeer mama. She feeds him with a baby bottle, sings to him, and plays her fiddle for him. As he grows stronger they become the best of friends. They fish together and play hide and seek; he even follows her to school one day, much to the amusement of her classmates and the consternation of her startled teacher. Anja soon trains him to pull a sleigh so she can go and get the best Christmas tree ever.

But is the reindeer, whom she has named Odin, really happy without any of his own kind? Anja asks Santa for advice. Santa has a great solution to make both Odin and Anja happy.

The Reindeer Wish is charming because Anja is both charming and exotic. She wears a plaid dress and a blue jumper with fuzzy snow boots and a pointy elfin red hat. The reindeer are either actually in the photos with her (except for cases in which this would be impossible—her atop a reindeer, for instance) or else they are very cleverly photoshopped in. I suspect the former because the illustrator, Per Breiehagen, has worked for National Geographic and Audubon. Then again, it may just be that I have been swept up in the story's fancy.

A lovely and timeless book to share with the children over a hot cup of cocoa and a fireplace to keep warm over the holidays.