Reimagining India: Unlocking the Potential of Asia's Next Superpower 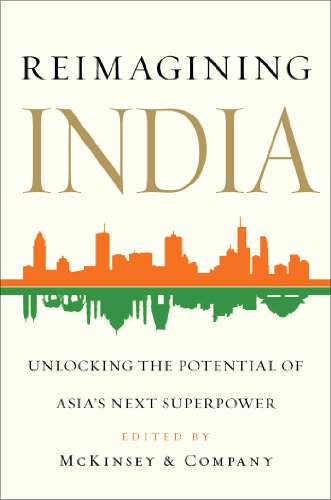 “The innovative approach . . . should appeal to both the specialist and the generalist . . .”

Writing about a country as big and diverse as India is fraught with challenges. How could one make sense of a country of India’s size and diversity? Yet books on the land are aplenty on the Indian economy, the IT industry, and most commonly, books comparing India with China.

Why a need for yet another tome on India? As the editors of Reimagining India: Unlocking the Potential of Asia's Next Superpower ask at the outset: “Yes, India is growing but is it doing as quickly and as brightly as it should. What is India’s true potential?”

To find an answer, McKinsey & Company, a global management consulting firm, commissions the best and the brightest from their fields to air their views the Indian business, politics, economics and society. The result is a prognosis on the nation's present and its future, its strengths and weaknesses, and what can be done to make it grow faster by “unlocking” its true potential.

But what is India’s potential? Is India destined always to be performing below its capacity?

This is not an easy question to answer because it is not just economic but cultural and social factors that ultimately determine a country’s performance. Singaporean diplomat and thinker Kishore Mahbubani uses an interesting measure to calculate what India could potentially achieve. He says that in 2010, Indians as an ethnic group earned $37,931 in the USA compared to a national average of $26,708, which makes it highest amongst all ethnic groups.

This prompts him to ask: “If India’s population of 1.2bn could achieve only half of the per capita income of the Indian immigrants in America, the country’s GDP today would US$24.65 trillion instead of a relatively trifling $1.85 trillion dollars, less than Italy’s. The gap between India’s potential and its actual impact is huge, perhaps the biggest of any country in the world.”

A rather simplistic way of measuring India’s potential some would say but it gives one a rough idea. It is not without reason that India continues to suffer from its comparison with China, and most people say India will continue to play second fiddle to its neighbor as, what the book’s publicists call it, Asia’s “other superpower.”

Economist Yasheng Huang, one of the world's leading experts on the political economy of China-India rivalry, rejects the argument that India lags behind China because India is a democracy and thus slower to achieve consensus and make decisions whereas authoritarian China faces little opposition and quicker on its feet.

He attributes the theory to a faulty analysis and “cherry-picking cases.” The relationship between political systems and economic performance, Huang argues, is “ambiguous and indeterminate,” adding that “Taiwan grew rich but authoritarian Maoist China didn’t, South Korea developed rapidly but North Korea stagnated. Strong one-man rule in Singapore succeeded but so did laissez-faire Hong Kong.”

Edited by Clay Chandler and Adil Zainulbhai of McKinsey, the book is quite rich in analysis and benefits from the multiple perspectives and information packed in newspaper column-length articles penned by a large list of contributors which range from leading businessmen (such as Anand Mahindra to Mukesh Ambani) and foreign investors and specialists (such as Bill Gates and John Chambers of Cisco) to journalists (Fareed Zakaria and Suketu Mehta).

The overall sentiment is quite upbeat: India’s future is bright if India implements the necessary reforms to remedy the problems that continue to hold it back: the endemic poverty, widespread corruption, and, most notably, the weak infrastructure.

It is true that the Indian growth story and “Incredible India” had been on a retreat recently due largely to the global economic slowdown, an opportunity which could be seized to implement the necessary reforms, if it were to move closer toward realizing its full potential.

The innovative approach of inviting a consortium of specialists to reflect on their chosen fields seems like a clever idea to write about a country of India’s diversity and complexity. Some repetition is inevitable yet the result is a book about contemporary India that should appeal to both the specialist and the generalist readers alike.

Tsering Namgyal is a journalist whose Asian economic and finance articles have appeared in such publications as Fund Strategy, Asia Asset Management Review, and Taiwan News where he was business editor. His novel The Tibetan Suitcase was published in June 2013.