The Reign of the Robots: The Collected Edmond Hamilton, Volume Four 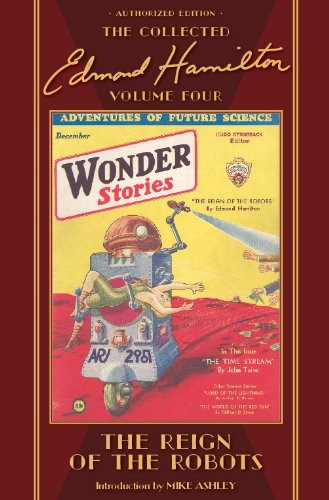 “This is a collection that sees a writer hitting his stride, working from a base of confidence and inspiration.”

This is the science fiction of the golden age of pulp magazines, a varied group of stories that moves from the fantastic and into the unimaginable. They often run from the incredible back to the implausible with a quick stop in the realm of unbelievable.

But as far out as they are, as removed from the possible as they can possibly become, they never leave the world of imagination, thrilling adventure, and strangely enough—real science.

There are stories about robots with minds of their own. Futuristic societies run by intelligent plants who use massive machines to corral humans for slave labor. Conquering earthmen who wage devastating battles for the supremacy of Mars and Jupiter (the only two planets worthy of occupying).

As well as a few adventures about the problems of escaping octopus-men, vampires, and even possibly aging. These are stories from a time when science was a cause for excitement.

Originally published between October, 1930 and December, 1932, the 18 stories in Reign of the Robot: The Collected Edmond Hamilton, Volume Four by Edmond Hamilton show a world that revolves around the possibilities that science held.

Time travel figures prominently. As does interplanetary movement. In one story a mad scientist captures his colleagues only to remove their bodies and imprison their minds into a computer-like machine with the hope that they will help him conquer the world. But as much as science matters, the stories still come down to human beings.

Each tale incorporates such characteristics such as loyalty or betrayal, love and hope, respect and ego. Science may be the catalyst for action, but the real draw is the way that the people at the center behave. This personalization of the field was something new.

When Mr. Hamilton was writing these stories, science fiction as a genre was in its earliest stages of development. Since the 1926 debut of the magazine Amazing Stories, the field had rapidly become filled with adventures that loosened the new genre’s original connection to real science. These stories were set on a massive scale and quickly became known in editorial and fan circles as “Space Operas.”

Many who wrote during this period were journeymen writers who had come from the world of simple adventure and action magazines such as Argosy or All Story. In some way they were simply following the example of Burroughs, whose explanation for John Carter’s presence on Mars was that Carter had died in a cave and through astral projection had woken up on another planet. The writers who followed Burroughs did so with little of his actual skill or imagination, they destroyed planets by throwing them into the sun or killed off entire galaxies. In doing so, each writer was paid by the word.

As they do today, fans wrote in complaining about the implausibility of so many wild plots. By 1930 editors began telling writers to tone down the outrageous and unreal and create work that was much more personal in nature.

While Mr. Hamilton was clearly influenced by the classics and writers such as Burroughs as well as magazine (pulp) writers that preceded him such as A. Merritt, he understood the new rules for getting a story published. This change in editorial directions leads to some of his best work ever.

This is a collection of stories featuring a writer hitting his stride. He was shaking off his influences and moving with confidence in more ways than one, straight into the future.

While the focus was on individuals, Hamilton used as much real life science as he could imagine. In what may be the most important and best story in this collection, “A Conquest of Two Worlds,” he incorporates the ideas behind an atom bomb decades before it came into fruition.

But he also recognizes the consequences, especially on an individual level. He creates reasonable and somewhat grounded explanations for time travel as well as one or two very unreasonable theories as well.

“A Conquest of Two Worlds” stands out for more than just the science that the writer was able to employ in the story’s construction. There is a very strong moral point at the heart of the action. Earth has managed to conquer space and is now going about colonizing other planets, specifically Mars and Jupiter for its own needs.

Along the way the Earth visitors conquer the local inhabitants and establish colonies. Much of the reason they are doing so is economic. Earth needs the minerals found on the planets and there is money to be made in those minerals.

As writer and bibliographer Mike Ashley notes in his introduction, the story clearly influenced many writers that followed behind Hamilton. In many ways the writer changed the genre by writing a compelling story about the “hostile nature of space exploration.”

Other stories in this collection may not reach the stratospheric ideals of “A Conquest of Space,” but they never fail to entertain or thrill.

While some may complain about the verbose and somewhat over descriptive nature of some of these tales, they were written for magazines that paid by the word. These qualities are part of the charm and on occasion, give way to some truly poetic and well-written ideas and phrases.

This is a collection that sees a writer hitting his stride, working from a base of confidence and inspiration. Hamilton’s work throughout this volume is not only historically interesting, it is downright fun.