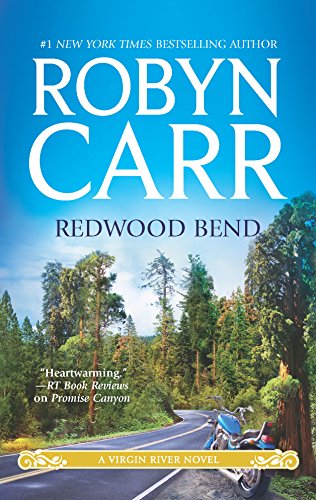 “Redwood Bend is the latest edition to the Virgin River Series and has Ms. Carr combining emotional difficulties and differences with love to make relationships work—so happy ever after becomes reality.”

Single mom Katie Malone is moving with her twins, Andy and Mitch, from Vermont to Virgin River, California, to be closer to her older brother, Connor. While traveling in the driving rain in the mountainous roads to town she gets a flat tire. Katie, always handy and wanting to be independent, tries to change it herself, but the too-tight lug nuts won’t budge. Some motorcyclists come to her rescue, offering aid.

Katie is mesmerized by one of the men in the group. With a fantastic physique and penetrating eyes, she recognizes him as Dylan Childress, the long ago child star of a well-known TV series. As a preteen, Katie had a massive crush on him, and she realizes his charm has only intensified.

Dylan is on vacation with some employees of his aviation business, who are also good friends. Though the trip is to last a few days, Dylan stays in town longer than he planned for he cannot control his attraction to Katie.

Katie is inexplicitly drawn to the handsome ex-teen idol, even knowing of his bad-boy reputation, which when she was young made him more exciting.

Not one to fall prey to a fling, Katie does not believe in one-night stands. The chemistry between them is magnetic, but Dylan states he is not interested in marriage and does not want children.

Katie’s soldier husband had perished in combat a month before the twins were born, five long years prior, and she has not been with a man since. She had loved her spouse, but now finds herself intensely attracted to Dylan, and cannot control how she feels. The two give into their lust with Katie falling in love with Dylan, knowing there’s no chance for a future for them. They both are from different worlds, and Katie has her boys to think of—and they come first.

Connor is concerned with Katie’s relationship with Dylan when the man prolongs his stay. Protective of his little sister, he is afraid she will get hurt and does not hesitate to inform Dylan he does not approve of him. Katie loves her brother, but wants him to butt out of her affairs.

After several weeks, Dylan leaves to attend to business. He acknowledges to Katie he’s had a great time with her. Surprised to find true love again, Katie is brokenhearted and wonders how he can leave her so nonchalantly.

Dylan is confused. He has never loved a woman like he does Katie, but because of his severely dysfunctional childhood—dealing with several step-parents, half-siblings and step-siblings—he is terrified of commitment. Will he be able to face his fears and go to his true feelings?

Redwood Bend is the latest edition to the Virgin River Series and has Ms. Carr combining emotional difficulties and differences with love to make relationships work—so happy ever after becomes reality.