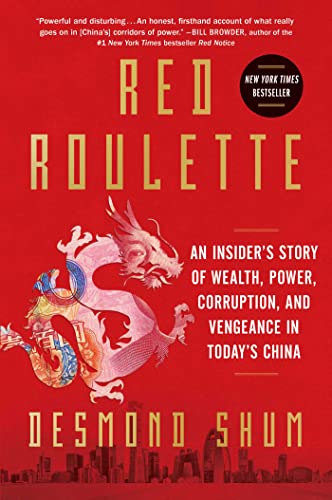 Red Roulette could be one of the most interesting and—at bottom—saddest books you will ever encounter. It is interesting for its description of how a powerful political-economic system functions and its tale of how two persons played the system to rise from rags to riches. The system’s material achievements are mind-boggling. China’s annual GDP growth exceeded 10 percent for more than a decade and still may exceed 5 percent. Much of the world’s largest population have moved from poverty nearly to middle-income comforts, even as some others have become millionaires or billionaires.

Born in Shanghai and raised in Hong Kong, college-educated in Wisconsin, Desmond Shum collaborated in business in the 1990s and early 2000s with his wife for many years, Duan (“Whitney”) Weihong. They used persistent creation of guanxi (personal ties and influence) in high places to make windfalls on the stock market and real estate.

To build a logistics hub next to Beijing’s main airport, Shum spent three years collecting 150 official seals from the many-layered Chinese bureaucracy. To get these approvals, he had to appease government officials. The airport customs chief, for example, demanded that Shum build the agency a new office building with indoor basketball and badminton courts, a 200-seat theater, and a karaoke bar. “If you don’t give this to us,” the chief told Shum over dinner, “we’re not going to let you build.”

Pulling multiple strings, Desmond and Whitney developed the largest air cargo logistics facility in China, the Beijing Airport Cargo Terminal, and the luxurious Bulgari Hotel in Beijing. Their highest-level contact was “Aunty Zhang,” wife of former Premier Win Jiabao, as revealed in a front-page analysis in The New York Times by David Barboza on October 26, 2012.

Why are these tales so sad? An outsider might hope that some humans had developed a top-down hierarchy that used reason and positive rewards to direct a hard-working people to do great things. What Shum describes, however, is a system where a privileged elite is wined and dined (with aged Moutai liquor as well as French wines) to obtain permission to do anything and later get a cut from whatever profits ensue. The children and grandchildren of early revolutionaries (1920s–1940s) deploy their assets to enrich their own offspring so as to keep both power and wealth within the family.

Not that all is harmony within this red aristocracy. Each family or interpersonal alliance competes with others to reach the top. When Xi Jinping or some other leader mounts an “anti-corruption” drive, the target is often a political rival. The pattern brings to mind the US Federal Reserve officials who used their inside information to buy and sell stocks and then, when exposed, simply resign. The Pandora Papers show how leaders in many countries hide their wealth in distant repositories. These are all relevant comparisons, except that abuses of privilege in China are on a far grander scale.

Red Roulette also occasions sadness because it undermines any hope that Communist China could ever be a reliable long-term partner with the West in addressing global challenges such as climate change. Shum confirms that China’s Communist leaders use Leninist tactics—whatever means could be useful—to achieve their goals. Smile today; deploy dirty tricks and coercive force tomorrow. Like Russian leaders, they see life as a struggle of kto kogo—who will do in whom?

Shum’s first wife hid her true age from him for a decade until he saw what until she confided to an astrologist. The couple also quarreled over who would get what from their millions in profits.

After they divorced, Shum moved to the United Kingdom with their son, now age 12, in 2015. The boy’s mother disappeared in 2017—apparently taken away by security people from her office in the Bulgari. Her phone was dead until September 2021, when she phoned Desmond and asked him to stop distribution of his book after reviews appeared in Western outlets. She warned that their son and she might suffer harmful consequences. Shum, however, did not act to stop the book’s release. Instead, he gave interviews to Time and other publications.

A review in the Washington Post sagely quoted Yugoslav dissident Milovan Djilas, author of The New Class: so long as the Communist Party controls all power and property, “it inevitably creates privileges and parasitic functions.”

Xi hopes that his condemnations of corruption signal a new model of clean authoritarian governance, but as Shum warns in the book’s final passage: “The reality is that the Party’s main purpose is to serve the interests of the sons and daughters of its revolutionaries. They are the primary beneficiaries; they are the ones sitting at the nexus of economic and political power.”