The Red Ribbon (The Irregular) 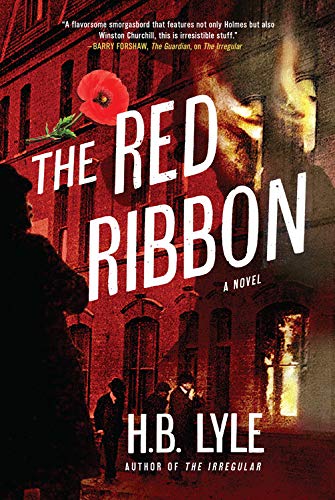 Mix together German spies, Russian anarchists, a beleaguered head of the newly formed British Secret Service Bureau, an increasingly militant suffragette movement, an interfering Home Secretary in the person of Winston Churchill, and Wiggins, once a member of Sherlock Holmes’ Baker Street Irregulars, and you have a compelling historical mystery no fan of either history or mystery can resist.

Sir Vernon Kell, head of the home section of the Secret Service Bureau, is responsible for ferreting out German spies in the tense year of 1910. Germany is saber-rattling, and the British government is suffering from a state of nerves.

The year before Kell and his scruffy, hard-drinking agent, Wiggins, had broken up a spy ring, but had failed to capture the man in charge “. . . known to them only as ‘Van Bork.’”

Although Kell and Cummings men must work together to prove the usefulness of the new service, Cunningham disapproves of Wiggins. “Gentlemen make the best agents. Men of honor, men of breeding, men of character.”

Wiggins is most definitely not a gentleman, and Captain Bernard Trench and Lieutenant Vivian Brandon are most definitely gentlemen—at least, in Sir Cummings’ estimation. When he reluctantly asks Wiggins if he has any advice for the “gentlemen,” Wiggins only asks where the “gentlemen” will be going, and if the country has the death penalty. When Sir Cummings answers in the affirmative, Wiggins is emphatic. “Don’t send them.”

Wiggins continues with his assessment of the two gentlemen agents. “. . . these jokers could be in training for months—and still not know their arse from their elbow.”

Wiggins is nothing if not blunt and to the point.

With the two “gentlemen” dispatched to Germany, Kell has several other things to worry about besides their fate. Winston Churchill wants a report on the labor unrest in vital industries such as mining and shipping, and he wants it immediately. Wiggins has not reported in, and Kell knows he himself is not suited to go undercover to the London docks or to a coal mine, so he makes up a report that downplays any danger just to get Churchill off his back.

Wiggins in the meantime has a task of his own. Jax, the daughter of one of the former Baker Street Irregulars, has a missing friend named Millie. No one has seen Millie, and Jax is worried. Millie worked at the Embassy, which Wiggins learns is a high class brothel catering to every upper class Englishman as well as foreign diplomats who have the funds to pay for entertainment by the hour or the night—depending.

Police interest in a missing prostitute is somewhere between slim and none, so Wiggins promises to look for Millie. He watches the embassy and decides something is wrong. If there weren’t, Tommie, another Baker Street Irregular until Wiggins had thrown him out, would not be the muscle at the Embassy.

Another thread in the plot is the suffragette movement and its increasing militancy leading to arrests and forced feeding in prison of the women arrested. Kell is very worried about the movement, not because he has strong feelings about women getting the vote—at best, he is ambivalent—but because his wife Constance’s support has led to a very tense marital relationship.

Constance becomes friends with a much younger group of suffragettes more prone to direct confrontation and violence. Her increasing absences from home lead Kell to wonder if she is having an affair.

Added to the mix of politics and spies is the coming funeral of the king. All the crown heads of Europe and elsewhere, as well as presidents, prime ministers, and other non-royal heads of states will be at the funeral. Kell is in charge of security and desperately needs the help of Wiggins, but Wiggins is off looking for a missing prostitute and Russian anarchists, not to mention Van Bork.

There are several climaxes in the course of the story, beginning with Kell and Wiggins, with Constance for cover, sneaking into Germany in time to save Sir Cummings from arrest by the Germans. His two “gentlemen” agents refuse to listen to Kell and Wiggins, and one will serve in prison at the Kaiser’s pleasure for several years.

Another climax is the clash between the suffragettes and the police in front of Parliament. Although the newspapers, mostly the mouthpieces of the government, downplay the police brutality, Kell witnesses the beatings of women, and is severely injured trying to save one young woman.

The Red Ribbon is a spy novel, a mystery, a study of social change, and an examination of personal relationships: Kell’s and Constance’s troubled marriage and the need to balance love and a cause; Kell’s and Wiggins’ relationship as employer and employee and their need to understand each other; and the relationship of government and the governed.

Each relationship is examined within the larger context of a changing social order, but there is nothing preachy or boring about the various social themes. Lyle demonstrates that a thoroughly entertaining story can also subtly encourage reflection on larger themes. Well done, Mr. Lyle.