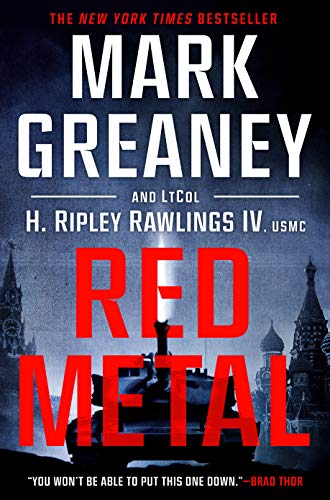 “maintains a rocketing narrative that seamlessly integrates multiple plot lines, the latest military hardware and tactics, and a variety of characters into a frighteningly plausible scenario.”

Mark Greaney’s first standalone thriller hits you like a thunderbolt and truly lives up to the phrase “can’t put it down.” From the first page until the ending, it maintains a rocketing narrative that seamlessly integrates multiple plot lines, the latest military hardware and tactics, and a variety of characters into a frighteningly plausible scenario.

Greaney’s earlier collaborations with Tom Clancy, in which he co-wrote three and solo wrote four of the classic Jack Ryan novels, clearly show he learned from the best how to create an engrossing thriller with plenty of high tech action and intrigue while not losing the characters and their place in the story. There are just enough heroes and villains to provide a variety of viewpoints on the terror and carnage of modern warfare while keeping the characters’ humanity and vulnerabilities all too real.

One hallmark of an excellent military tech thriller is research and authenticity and here Greaney and his co-author, Hunter Rawlings, have clearly done their homework to ensure the actions are both convincing and thrilling. This can be a tough challenge for this genre as readers can often nitpick over the smallest details. The capabilities of both machines and warriors are very realistic, and the reader can almost sense the tension as battles are waged across Africa and Europe, with the difference between life and death often determined by split-second decisions under the stress of combat.

Finally, in a nod to a favorite plot device and hopefully as a sign that many future novels are in store from this duo, the reader is left with a huge teaser at the end that fans of these types of thrillers probably should have seen coming.

This novel is undeniably the Red Storm Rising of the next era of 21st century conflict—the definitive military techno-thriller that will set the standard for all succeeding novels. For those of us who remember the first time we read Tom Clancy’s ground-breaking novel in the mid-1980s and were in awe at how realistic it was on the potential for an all-out war in Europe, Greaney has unquestionably established himself as a worthy successor. This will no doubt be one of the most successful thrillers of 2019.