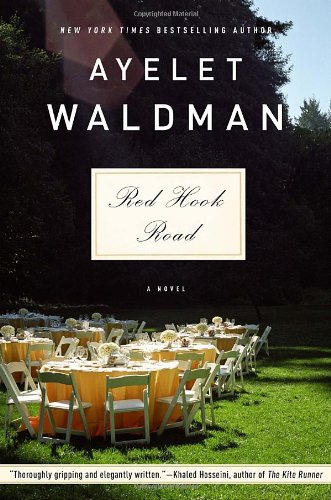 With her last few novels, Ayelet Waldman has skillfully mapped the emotional journeys of self-aware, sensitive, and deeply grieving characters. She works to this strength in Red Hook Road as she details the escalating wreckage of two Maine families in the wake of tragedy.

Iris Copaken is the matriarch of a family that spends every summer in an old Queen Anne home on the Maine coast. Though her ancestors’ names litter the local graveyard, she’s considered a “from-away” by the local folk because she and her family return every fall to New York, where she works as a professor. One of those folks is Jane Tetherly, the matriarch of another old Maine family, who also happens to clean Iris’s house. When Iris’s daughter and Jane’s son decide to marry, both women have their own reasons to question the wisdom of the match. These rifts become wider—if less significant—on the young couple’s wedding day, when an accident on the way to the reception ends in the couple’s grisly death.

Then the real story begins. Broken up into four sections corresponding to four consecutive summers, the novel details how the resulting heartache disrupts the lives of the surviving family members. The sister of the bride drops out of graduate school and plunges herself into a romantic relationship that uncomfortably mirrors that of the dead couple. The brother of the groom gives up his scholarship to Amherst to shoulder his brother’s dream project—restoring an old boat—sticking to it though it increasingly gives him no pleasure. A father turns his back on his wife and takes up boxing, finding relief from pain in being pummeled by much younger opponents. And Iris, the book’s emotional center, grapples with her own misery while feeling powerless to do anything to mitigate the damage spiraling through her family.

Ms. Waldman knows how to make the most out of a telling detail. She packs visceral significance in finding a candy wrapper stuck in the gummy corner of an Old Radio Flyer, or discovering a favorite shirt moldering at the bottom of her dead daughter’s beach bag. The author plumbs every shifting feeling, and describes in graceful prose all the characters’ psychological uncertainties, their impotent rage and helplessness. Reading Red Hook Road is an affecting experience in itself. The book throbs with honesty and heartbreak, which makes the final act of the novel all the more curious.

For into the delicate lacework of this domestic story, the climatic moment lumbers, creaking with portents. It’s surprising that the author would choose to insert a dramatic scene involving spectacular rescues into such an elegant narrative—and, in the process, have “fate” rob two of the main characters of the opportunity to make their own decisions. The scene doesn’t sink the book, but it does stand out against the subtle wisdom of the earlier portions.

Despite this flaw, Red Hook Road is a multi-hankie read. Ayelet Waldman has once again proven herself an expert chronicler of emotionally complex relationships.