The Red-Haired Woman: A novel 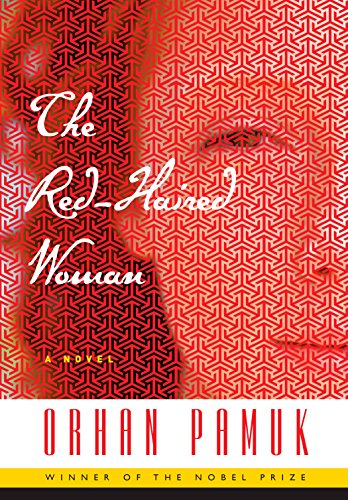 Like most of the nine other novels by Nobel laureate Orhan Pamuk, The Red-Haired Woman is a story that personalizes political, cultural, and philosophical conflicts, especially east vs. west. But above all, it is a tale of obsession.

The first-person narrator, Çem Çelik is still obsessed—almost 30 years later —with the mentor, the mysterious woman, and the possible murder he experienced during five summer weeks in 1986 when he was a 16-year-old apprentice fruitlessly trying to dig a well by hand on a barren plateau outside of Istanbul.

Time after time, staring out the airplane window as he flies from Istanbul to jobs in Libya, Azerbaijan, and elsewhere, the adult narrator “would invariably see the town of Ongoren below”—the small settlement near his well-digging job. “The view would disappear in an instant as the plane turned again, rolling gently on its axis or passing through a cloud formation, but even then, I could sense the lay of the land beneath.”

Çem is a middle-class high school student when he impulsively takes the temporary well-digging job with an old-fashioned water diviner, Master Mahmut, seeing it as a nice outdoor experience, a break from studying, and a chance to earn “quick money.” Finances are tight because his father—a pharmacist and left-wing political activist—had abandoned the family the previous year.

During those weeks, Mahmut clearly becomes a substitute for Çem’s father—in some ways, a more beloved father figure. “Master Mahmut took much more of an interest in my life than my father ever had: he told me stories and taught me lessons; he never forgot to ask if I was all right, if I was hungry, whether I was tired,” Çem recalls.

It’s a tough love, however. The well digger thinks Çem is slacking, “I’d see that accusing, disdainful, maybe even slightly suspicious look frozen on Master Mahmut’s face. It made me angry at myself but also at him.”

Nevertheless, Çem obeys, almost without question, digging down “equal to the height of a ten-story building,” through rock and hopeless dry soil, with only a bucket, a pickaxe, a spade, and a windlass to haul up the heavy bucket. The pair continue even after the businessman who had hired them, in hopes of constructing a fabric washing-and-dyeing factory, cancels the deal.

In describing the excavation, Pamuk’s language is so sharp that a reader can taste the gritty sand and feel the claustrophobia. From the bottom of the well, “the sight of the opening [was] so terrifyingly small and far away . . . It was remote, like the world at the wrong end of a telescope.”

Underlining the father-fixation, Çem also becomes obsessed with two classic myths of patricide and filicide: the Greek story of Oedipus and the 10th century Persian epic of Rostam and Sohrab.

Meanwhile, during his evening strolls with Master Mahnut to Ongoren, Çem exchanges a quick glimpse with the eponymous Red-Haired Woman (whose label is always capitalized). “A melancholy smile formed on her perfectly curved lips, as if she’d seen something unusual in me or [my] horse.”

That’s all it takes for Çem to begin stalking the tall, beautiful woman. He guesses that she is about 10 years older than he is, and that she lives in a house with her mother, younger brother, and other relatives. In fact, he ultimately discovers that she is 33, married, and part of a traveling theater group.

About halfway through the book, this semi-idyll, semi-failure is disrupted by what might be an accident or a murder. Çem flees back to his mother and his expected path to a career as a geologic engineer.

The novel drags for a long section after that, as Çem marries, unsuccessfully tries fertility treatments, builds a wildly profitable business, and pursues his father fixation mainly through literature and art.

But of course obsessions rarely fade away, and Çem will be pulled back to the fateful summer. The reader—trusting Pamuk—is largely willing to wade through Çem’s boring adulthood in order to reach that reunion (although Pamuk could have shortened the slog by 20 pages or so).

Then again, Pamuk rarely makes it easy on his readers. He and his narrators are so in love with erudite philosophical and political discourses that major plot points often seem like nuisances, to be discarded in a subordinate clause.

Happily, The Red-Haired Woman is more approachable than some of Pamuk’s oeuvre (like Snow), thanks largely to the sharp descriptions and fascinating plot. Translator Ekin Oklap slips up only in a few spots, such as when Çem uses the way-too-modern term “off-putting” to fret about what to say to the Red-Haired Woman.

And as always, the social conflicts that Pamuk explores through his stories are pungent.

An outspoken supporter of Kurdish rights and opponent of Turkish President Tayyip Erdogan, the author slips in some interesting comparisons of Iran, Turkey, and the West—some of which might diplomats today might want to read. “In Turkey, we’d forgotten all about Iran as soon as we’d turned to the West,” he notes. Yet in Tehran, “men’s hand gestures, their facial expressions, body language, the way they lingered in doorways to let each other pass, how they stood around dong nothing in particular and whiled away the hours smoking cigarettes in coffeehouses, reminded me uncannily of Turkish habits.”

One of the most poignant topics in this novel is the contrast between old and new. As an adult engineer, Çem realizes that new well-digging drills “could bore fifty meters in a single day, laying pipes that would pump water up from the depths of the earth in no time and at negligible cost, all on the very same land Master Mahmut and two apprentices would previously have toiled on for weeks.” His summer job was futile; Master Mahmut is obsolete.

But some things never get obsolete, including good writing by masters like Pamuk.