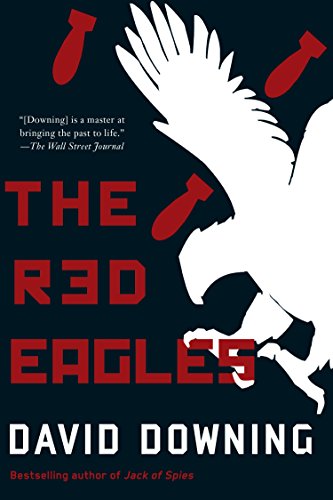 The premise: Toward the end of World War II, the Russians are desperate to obtain the material to make an Atomic bomb, and they devise an amazingly convoluted plan to do just that. The plan involves tricking the Americans and misleading the Germans, and to achieve this end,   Downing makes Americans during this time stupid and easily deceived. While America during this era may have been naïve, it seems too convenient to make them the stupid bumblers he presents.

Convoluted is the operative word here to describe this story. It is difficult to follow due to the number of reasons not the least of which is characters with varied nationalities including German, Swedish, and Russian and multiple names. The roles of each character in the story are often vague and in some cases unnecessary to the story. Characters appear from nowhere, have a small part in the story, and then disappear. Names change and the story gets muddy.

There is a great deal of killing in cold blood in this story. Some can be explained away as protecting the espionage plan, but it often seems to be killing just for the sake of killing. Case in point: the lead female, Amy/Rosa is involved with a married man who has absolutely no role in the espionage plot. Enter Kuznetsky, the ex-American-now-turned-Russian, and he finds the boyfriend and kills him in cold blood. Or the young boy who runs away from home and happens to be in the wrong place at the wrong time and is killed. Both of these characters could be written out of the story and there would be no adverse affect on the story at all.

Downing provides us with a bevy of nasty antagonists—take your pick. They have no qualms about killing people for what they believe is their cause or just for the heck of it. But try to find the protagonist in this group and you will be sorely tried!

Downing is vague as to what the exact plan is. He drops hints about how the Russians will obtain the material they need to make their own bomb, but the dots are not connected and don’t lead down any logical or organized path toward a conclusion. He takes the reader through a maze of ambiguous strategies with hints at what the full plan is, but there is a sense that he is keeping things from the reader, perhaps to "drop the bomb" at the end of the story.

And then there’s the mafia and the dumb southern sheriff. REALLY? There are times when it feels like Downing has placed American stereotypes in the story just for effect. Brief appearances with little or no attachment to the story.

On a side note . . . Downing might want to consult a map of Washington, DC, before he takes his character on a walk to the Capitol, past the White House, to the Lincoln Memorial.

On the whole, the idea held promise but the story wandered far afield through dead-ends, unnecessary characters, and false starts.