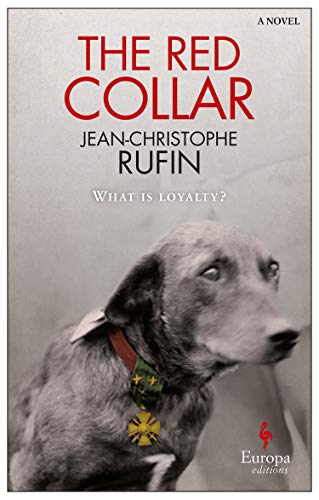 “A modern parable about loyalty to others, fidelity to one’s convictions, and the self-effacement needed to bear the consequences of living by one’s beliefs.”

“With the crushing heat over the town, the dog’s howling was unbearable. The animal had been there for two days, and for two days it had barked.” So begins the mystery in this short novel by Jean-Christophe Rufin, one of the founders of Doctors Without Borders and a former French ambassador to Senegal. Well known in Europe (he has twice won the Goncourt Prize), Rufin’s lambent yet unaffected prose is now available in English.

This graceful author beckons us along. We willingly follow despite unanswered questions that remain unanswered for many pages. We don’t feel that Rufin is being coy or toying with us. Through the restraint of his deliberate pacing and the spare simplicity of his scenes (not a word is superfluous) what we feel is a modern parable about loyalty to others, fidelity to one’s convictions, and the self-effacement needed to bear the consequences of living by one’s beliefs.

The setting is 1919, after the War, in a forgotten French town. A sweltering heat wave has made everyone lethargic yet prickly. A mangy dog with a torn ear barks incessantly outside an abandoned barrack that now houses a single prisoner of war. Who is he? To whom does the dog belong? Why does it bark incessantly, then inexplicably stop, as if telepathic, whenever the prisoner is being questioned, only to resume its existential howling afterward?

It is rare for a short novel to be so well constructed, its characters rendered with minimal strokes as if they were line drawings. The prisoner’s judge and interrogator, an upper-class military officer, comes to the task with his own baggage. Away at the front for years, he is eager to return to his family in Paris. But inculcated with a sense of duty, he remains to interrogate the accused. His sense of moral fairness compels him to offer the accused several ways of exoneration. But the prisoner refuses to take an easy way out.

In the countryside miles from where the prisoner is held, a well-read, self-sufficient woman ekes out a subsistence living on her inherited farm. “She never spoke to anyone without crossing her hands behind her back.” She waits, alternately hopeful, resigned, and angry. Who is her boy’s father, and why won’t she reveal his identity to the military judge? Prior to his capture the prisoner had been following her. Or had he been following the boy?

At the end a final question is resolved: How does the faithful dog bind all these characters together, a dog who in the trenches could easily distinguish friend from foe and attacked foes instinctively on sight? Europa Editions has once again offered to English readers a wonderful book that makes us question our own character and the beliefs we hold most dear.