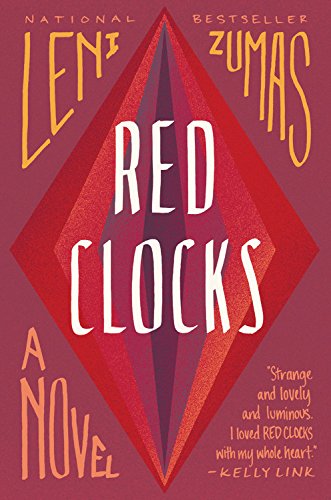 The United States has passed the Personhood Amendment, giving fertilized human eggs full legal rights as citizens. As a result, abortion is banned. Adoption for single parents will become impossible with the enactment of the Every Kid Needs Two legislation. Canada has closed its borders to women of fertile age, barring a pregnancy test at the border.

The alternate/near future America of Leni Zumas’ Red Clocks is indeed a grim place. The story centers on the reproductive life and decisions of four women (or near women—one is a fifteen year old). Zumas has chosen to identify each of her sections by a description, perhaps the way the woman thinks of herself. The characters are given names in sections dedicated to the life of another character, but none identify themselves by those names.

The Wife (Susan) is a mother of two, unhappily married, regretting her choice to walk away from law school upon her first pregnancy, ambivalent about the two children she’s since birthed. The Daughter (Mattie) is 15, intelligent, adopted, and terrified at being pregnant. The Biographer (Ro), at 42 and single, is rapidly approaching the end of her chances to either have her own child or to adopt. The Mender (Gin) is aloof, a natural healer and provider of fertility remedies as well as abortifacients. She is also both an abandoned child and a mother who gave up her child for adoption.

Zumas weaves the lives of these four characters into a blue state nightmare world. Ro is Mattie’s teacher and envies Susan’s seemingly perfect life. Susan secretly loathes Ro, her husband’s colleague, wishing her failure with the book she’s writing while envying her solitude. Mattie is treating both Ro’s infertility and Mattie’s pregnancy, while hiding her own secrets. None of them are exactly where they want to be in their personal or professional lives, and fertility (or lack thereof) is the culprit.

Though all four women are allotted roughly equal page time, it is Ro that feels like the leading character. She reveals more about herself and how deeply she is left at a loss and hurting by her infertility. Her desperation to have a child by any means is palpable: “If it is possible for you to come to me, little one, let you come to me. If it is not possible, let you not come, and let me not be shattered.”

Interspersed with the narratives of the four women are bits of the biography Ro is working on, about a 19th century polar explorer who had her own problems that arose from being female. The manner and timing of their interspersion, too, are revelatory of Ro’s state of mind and world view. Zumas used this unusual narrative structure well in making both statements about Ro and about femininity in general.

The writing in Red Clocks is by turns lovely and overblown. The lovely: “I have been lifted off the earth to sit on the ocean with men whose lives are nothing like mine yet whose waking dreams are identical: clumsy suits of caribou hide, our fingers numb, the flame-red gash or sunrise. If wrecked in this vessel, we wreck together.”

The overblown: “Her owl teeth will catch flame first, sparks of blue at the white before the red tongue catches too,” or, “The innermost chamber of her left ear notices powderpost beetles scratching in the roof joists, laying their eggs in the seams of the wood.” Zumas has a sense of language that is poetic, but that sensibility rubs awkwardly with her prose and rings false to the novel reader’s ear.

The use of lists and sentence fragments in the place of narrative is also problematic. Used in conjunction with such an emotionally driven topic, this writing strategy renders Red Clocks strangely cold and emotionless. None of the characters, aside from Ro, seem invested enough in their own individual dramas to flesh out their feelings; indeed, they seem to feel nothing more than a mild annoyance. It’s difficult to care about any of the characters when the dialogue or narrative starts to build up emotional steam, only to be interrupted by choppy sentences or strange phrasing.

As a female reader of a certain age, both the vulvular cover art and the fertility “clock” imagery of the title are frustrating. Though this novel would clearly like to be the next The Handmaid’s Tale (and will inevitably be compared to such), it misses the mark by (once again) reducing women to uteri with legs, their main concern being childbearing. While Atwood’s book does approach fertility (the obvious role of the handmaids), it is just as concerned with the larger questions of personal freedom and equality. Red Clocks wears a dystopian cloak, but with a few, very minor tweaks could easily been set in modern day, real world America.