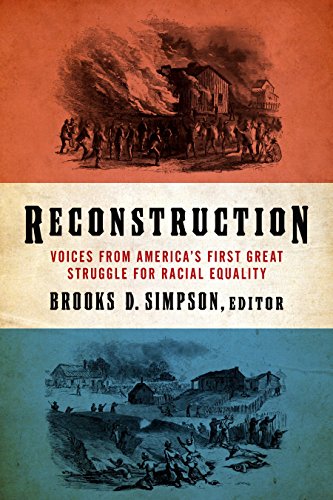 It is unfortunate and even tragic in today's society that our history is so largely unknown, mostly untaught and unlearned. The Reconstruction period which immediately followed the Civil War could be characterized as a "black hole" inasmuch as those events are even more unknown, if that's possible. Perhaps that is a result of the fact that that era was such a failure, owing to a number of factors.

Given the results of the war, the country attempted to complete the then-unfinished business of not just eliminating slavery but providing for those freed people and endowing them, ostensibly, with the same rights, privileges, and immunities of citizenship as those enjoyed by the white portion of the population, dating from the founding of the Republic. It was not to be, and we continue to struggle today with the unsolved problems of the Reconstruction Era.

As noted above, Reconstruction policy denouement began with the Andrew Johnson Administration right through the contested election of Rutherford B. Hayes in 1876. It was a result of a combination of continued postwar Southern resistance-social, political and violent-to racial equality, basic postwar fatigue on the part of the Northern population, a desire to return to the business of national progress and normalcy and multiple Supreme Court decisions.

In spite of the best efforts of the Federal government to enforce the provisions of the 14th and 15th Amendments, the government's authority was ultimately severely limited or eliminated in enforcement by such Supreme Court decisions as U.S. vs. Cruickshank and U.S. vs. Reese, decisions that affected the civil rights of freed men by invalidating at least parts of the Civil Rights Acts passed by Congress in the 1870s and redefined concepts of state and national citizenship.

The final straw, of course, was the bitterly contested election of 1876 that saw Hayes elected by a single electoral vote primarily in exchange for the removal of Federal troops from the previously rebellious Southern states thereby allowing them to "redeem" their state governments from the hands of carpetbaggers, scalawags, and black Republicans. The latter had previously enjoyed some small measure of success in political representation in national and state politics.

The documents compiled in this volume are historic primary sources and arranged chronologically over the course of a period dating from 1865 to 1879. Included here as well are additional insertions which touch upon universal suffrage and civil rights for women relative to the struggle for black enfranchisement and their civil rights in order to realize the great ideal of "all men are created equal."

These documents represent speeches given in Congress (many from black representatives), testimony provided in Congressional committee hearings on the Ku Klux Klan and violent actions in the South, newspaper editorials, personal op-eds and memoranda, interviews and exchanges between individuals, letters between politicians of national stature and those of supplication and requests for help from freedmen to Presidents Johnson and Grant, among others.

Creditably, these are not all one-sided although they are primarily from the Northern, black, and federal government point of view. Some were written by Southerners and Southern newspapers, thus giving perspective from both sides.

By the same token, be forewarned as this is the language of the 19th century. It tends to be somewhat long-winded, lengthy, and verbose, particularly those documents by politicians. Many sentences will seem to be run-on yet, if one reads closely, they are grammatically correct. One may even find oneself rolling one's eyes in some instances.

Included are three very helpful and informative sections. The first is a chronology of significant events which happened over the course of Reconstruction. The second is of biographical notes which provide information on each of the writers referenced as many may be unfamiliar to those who are not up on significant public statesmen and individuals of 19th century American history.

The third section is the notes. Not only are they extensive but they also provide a considerable amount of historical context and/or background information relevant to each document or author referenced in the text.

When it comes to history, original documents are best, providing not just information but also viewpoint, outlook and the language of the times. Given the legacy of Reconstruction, this is a necessary addition to its canon, putting these documents in a convenient format for all to study. The Library of America should be commended for this effort.