The List: A Week-by-Week Reckoning of Trump’s First Year 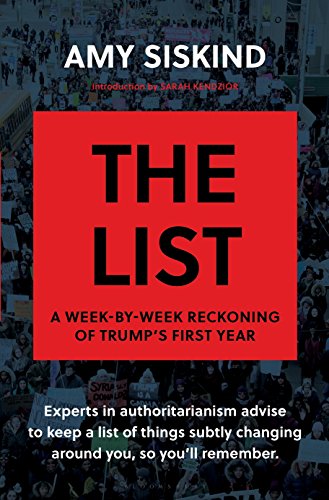 "Siskind provides a valuable reference work for the first year of the Trump presidency—judged the worst in U.S. history by leading political scientists."

What happened in the first year of the Donald J. Trump presidency is detailed here with information drawn from a wide variety of sources—not just the major newspapers but also The Hill, Politico, MSNBC,  MaddowBlog, Atlantic, BBC, CNN,  BuzzFeed, Forward, Fox News, and many Twitter accounts.

The List includes events related to domestic and external affairs. When Siskind began this survey in November 2016, her “authoritarian” list included nine to twenty items per week. The week of the Women’s March, as Trump took office, the list grew to thirty-something items. In his first hundred days in office, the list grew to and found a new resting point of sixty- to seventy-something items per week. By May 20, 2017, the list approached and then began to exceed one-hundred events each week. To give a flavor, here are a few events drawn from different weeks:

On May 20, after 26 weeks—half a year—Siskind urged readers to be aware of events that many people were  normalizing and accepting each week amid the chaos. They failed to notice many items in the news because of the overwhelming number of stories. Normalizing”meant accepting what might earlier have shocked.

Siskind listed 133 events and reported Trump’s most aggressive statements against the Department of Justice, the FBI, and the court system for not doing what he thought they should do.

Caveat emptor! Siskind warned that experts in authoritarianism advised citizens to keep a list of things subtly changing around us. Her message paralleled that of Steven Levitsky and Daniel Ziblatt, How Democracies Die (Crown, 2018), who noted similarities between cases in East Central Europe in the 1930s and Latin America in the 1970s and the United States in 2016–2017.

Any historian of the 45th presidency should consult Siskind’s list. To be sure, her selection focuses on events likely to disturb liberals, but many of these same events might please Trump’s base. Most of her sources are centrist or liberal, though she does cite many tweets from the White House and some bulletins from Fox News. For one explanation of these phenomena (besides the collected works of Sigmund Freud and Karl Marx), readers might consult the book reviewed at NYJB David Neiwert’s Alt-America: The Rise of the Radical Right in the Age of Trump.