The Reckoning on Cane Hill: A Novel 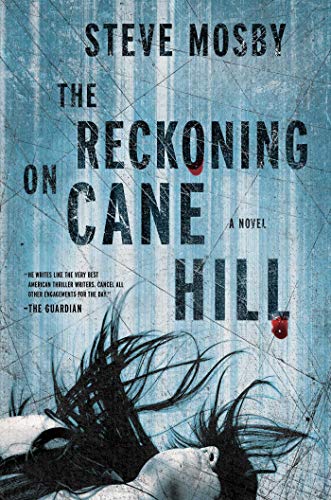 Thriller readers who yearn for intrigue, swift pacing, and surreal happenings will enjoy every word of Steve Mosby’s The Reckoning on Cane Hill. From the first chapter to the haunting finale, they’ll also be immersed in an emotionally powerful story that will resonate with anyone who has struggled to recover from the deepest forms of grief.

In a plot that will appeal to fans of Dennis Lehane and Michael Robotham, the narrative chronicles two investigations. One is led by Detective Mark Nelson, who’s confounded by a disfigured woman who tells him she has returned from the afterlife. Nelson knows the woman she claims to be died in a car accident two years before, but he can’t deny her likeness to the dead woman or her accurate knowledge of the woman’s life.

The second investigation follows the trauma experienced by Detective David Groves, who in the first chapter is led into the woods to identify the body of his son, who went missing from the family’s backyard. In the years that follow, Groves receives cards from an anonymous sender on his son’s birthday. This year’s version, however, comes with a different message: I know who did it.

While many readers will select this book on the basis of that compelling plot description alone, they will be rewarded by rich characterizations of Nelson and Groves and the people who are close to them. The writing is vivid, with several scenes in which both men feel as if they’re losing their footing on a tightrope between the world they believe they know and an alternate universe full of things that cannot possibly be happening.

Although these characteristics will be especially appealing to fans of the paranormal thrillers that have become popular in recent years, the story is also an engaging police procedural. Despite their emotional instability, Nelson and Groves are accomplished investigators who are determined to get to the truth despite a series of unnerving events that shake their mental equilibrium and threaten to expose their own sins.

Mosby, a CWA Dagger-Winner and author of six previous novels, including The Nightmare Place and The Murder Code, is especially adept at keeping seasoned mystery readers off balance. Few will predict the secret truth at the heart of the story, revealed near the end in an outcome that is completely—and eerily—believable.

By that point readers will see the story itself as a labyrinth through the psyches of people who have lost loved ones, with hairpin turns into the dark corridors of both investigations that intersect in surprising places. While the writing is brisk, the story becomes a meditation on the nature of good and evil, with tricky plays of light and shadow that make it difficult for any of the characters to find their way to justice and peace.

If the story were to be described by one central theme, in fact, it would be a reckoning between the relative degrees of right and wrong perpetuated by everyone at various points in their lives.

In this case the judges of that rightness or wrongness are the story’s true villains, operating in a place called Cane Hill, where Heaven and Hell coexist, and no one survives unscathed.