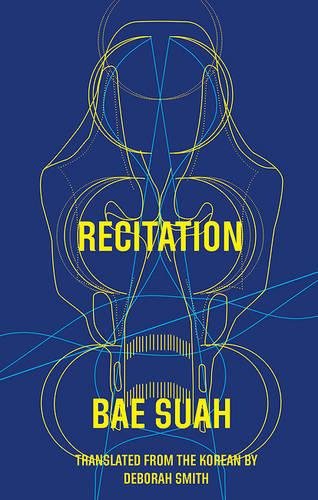 After two novellas translated into English (Nowhere to be Found, 2015 and A Greater Music, 2016, the latter reviewed in NYJB) South Korean post-modernist fiction writer Bae Suah and British translator Deborah Smith—who also translated A Greater Music and two novels by Han Kang (The Vegetarian and Human Acts)—return with an even more ambitious full length novel, Recitation, a novel of ideas with frequent philosophical digressions that further develops A Greater Music’s theme of living abroad while also addressing globalization, racial identity, and intolerance. It is a challenging yet cognitively engaging and rewarding read.

Whereas in A Greater Music the nameless South Korean first-person narrator is also the protagonist and the setting is mostly Berlin with one brief chapter in Seoul, by contrast in Recitation an unnamed first-person female narrator relates the nonlinear story of Kyung-hee, a divorced middle-aged South Korean recitation actor who after breaking her toe during a performance adopts the vagabond lifestyle of an international traveler, which affords her the opportunity to engage in long philosophical conversations with a variety of friends and acquaintances in several foreign cities including Munich, Berlin, Vienna, and an unnamed capital city of a now independent former Soviet republic. She returns to Seoul periodically where she replenishes her funds by narrating audiobooks.

Recitation’s initial chapters are somewhat reminiscent in style and plot elements of A Greater Music. Like that book’s protagonist, Kyung-hee also enjoys classical music. She choses Munich as a destination because she enjoys the international broadcasts of that city’s Bayern 4 classical radio station. A Greater Music’s narrator has a German teacher referred to by her initial M., and Kyung-hee’s former German teacher is named Maria.

In Munich Kyung-hee rents a room with an onion-domed ceiling and a skylight at the pinnacle in the home of an elderly and culturally refined retired teacher couple with whom she attends cultural and social events. When she moves to Berlin her new landlord is a Korean shaman healer/masseur and her fellow tenant in the apartment is also Korean, but this does not diminish Kyung-hee’s sense of herself as a citizen of the world, a feeling that may explain why she more than once forgets to carry her passport with her at all times.

How Recitation’s narrator may or may not figure in Kyung-hee’s life is related late in the novel, and how she reconstructs long detailed conversations in which she was not present can only be inferred. Those conversations include a variety of esoteric topics, but one recurring theme is Kyung-hee’s contention that residents of large cities irrespective of nationality constitute a cosmopolitan tribe who have more in common with one another than they do with their rural fellow nationals and are more drawn to international corporate symbols such as the woman in the Starbucks logo than to their own national flags and emblems. Rural and working class nationalists worldwide might disdainfully agree; the 2017 publication of the English version of this 2011 novel is timely.

This urban cosmopolitanism may explain why although specific sections of the novel are set in specific cities Kyung-hee sometimes recalls first meeting someone “in a European city” and other times doesn’t specify time or place and never mentions in which languages conversations occur. Likewise Kyung-hee’s lover is referred to as “Mr. Nobody.”

Kyung-hee’s Berlin landlord is a traditionalist who disapproves of his Korean tenants’ non-Korean romantic partners, but he’s not an unlettered ignoramus. When not seeing patients he spends his days at a local library studying German philosopher Friedrich Nietzsche, and he engages Kyung-hee and Mr. Nobody in a long conversation about Egyptian mythology and how the sun god Ra is both his own father and child (a folktale toward the end of the novel also has an Oedipal theme).

Mr. Nobody is one of several characters who challenge Kyung-hee’s urban elitist globalism. Like her he has an East Asian appearance, but unlike her he grew up in the former Soviet Union the son of rural tribal pastoralists. Although he acquired higher education and became an academic and journalist he doesn’t take his privilege for granted, and his and Kyung-hee’s class differences as well as his ideological stridency doom their relationship. While they are still together Bae’s narrator captures a surrealistic intimate moment:

“Almost at the same time as she spoke, a specific point on one of Mr. Nobody’s mucous membranes passed over the keenly-alert spot on one of Kyung-hee’s own, adhering closely. An invisible fire passed slowly over, burning vigorously. The tip of his tongue prised Kyung-hee’s eyelid open, and took some time to lick the surface of her eyeballs clean. His tepid saliva soundlessly scalded Kyung-hee’s eyes. Kyung-hee shuddered, now aware of the fact that she was not a person but some primitive organism made up only of duplicated sensations, a blind insect-cum-mutant butterfly with thousands of eyelids. With thousands of eyelids that open as one.”

Which specific mucous membranes is left to the imagination of the reader, whom Bae invites to speculate about so many of the novel’s vague details. This is not a book for lazy readers; Bae expects us to show up ready to work. Her handsome prose, however, is never an obstacle.

In the middle of the novel the pace picks up as the dense prose is interspersed with dialogue and narrative movement. Kyung-hee becomes friends with Mr. Nobody’s oldest son Banchi, a fellow former student of Maria, a Buddhist, and now a married father, whom she visits in his unnamed home city where he quotes Philip Larkin’s poem “Talking in Bed” to discuss the concept of home.

He also introduces her to the egalitarian global travel organization Karakorum whose members (including Maria) provide one another with free hospitality. Middle-class hosts may offer a spare bedroom, while struggling members might only offer floor space in the corner of a bedroom in a shared apartment.

At Banchi’s suggestion Kyung-hee travels to Vienna to see Maria, who is now working as a supermarket cashier. At a Starbucks across from the opera house Kyung-hee has a long conversation with a white haired East Asian man during which they never introduce themselves by name or country of origin.

Though he is a complete stranger Kyung-hee describes intimate details of her childhood as the younger daughter of conservative academic parents who expressed love through harsh discipline, and includes a disturbing scene with her much older sister whom she never sees again.

In his response, the East Asian man cites W. G. Sebald (an author Bae has translated into Korean) in The Rings of Saturn quoting Jorge Luis Borges’s short story "Tlön, Uqbar, Orbis Tertius" on the negation of time. The East Asian man explains “that this world’s expiration date has already elapsed, and that the sensations and happenings which we believe ourselves to experience, which we feel is life, are no more than the flickered reflections of faint, fictitious relics which the final stages of this by now vanquished world have left to linger within the light.”

The East Asian man later mistakes Kyung-hee for Chinese, and a hostile Austrian mistakes her for Vietnamese. Despite her urbane globalism, in Berlin and Vienna Kyung-hee finds herself among East Asian expats. Bae accurately describes the transience of ex-pat communities.

Kyung-hee recalls to Banchi how she tried to stay in touch with his father, but “he’d returned to Russia. To White Russia, that is, which, to him as a university student, had ‘inscribed distinctly into the flesh what it means to wander the streets and train stations of the world with the face of an East Asian.’ The country that had had a strong white fist, the country that had been like a cold steel net.”

Banchi asks her, “Are you aware that there are fewer and fewer places these days where, as an alien, an outsider who believes in taking an objective point of view, you can squeeze your way in and be accepted?”

Kyung-hee describes herself as having Manchurian, Mongolian, and Siberian physical features, but since those are the nationalities to which Koreans are genetically closest, what does her self-description reveal? Perhaps that she is not at peace with her Korean identity, which may explain her travel bug.

The enigma of Kyung-hee’s literal identity and very existence is central to the novel’s final section where Bae demands the most challenging mental work of her readers, which may call to mind the East Asian man’s explanation of Borges’ negation of time. Set in Korea, it also describes Seoul’s economically blighted periphery that illustrates the cost of globalization. Recitation will make Bae’s anglophone readers and other fans of post-modern fiction eagerly await the publication of more of her novels in English.