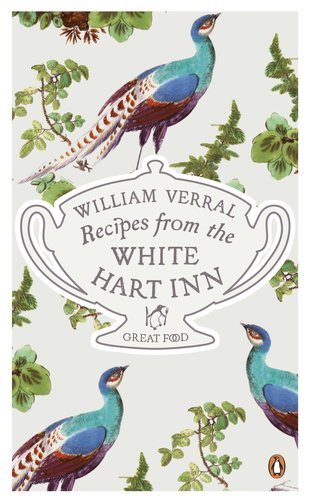 Behind every cookbook, there’s a tale with a lot of backstory.

William Verral’s Recipes from the White Hart Inn provides a splendid example of that truism.

During the heyday of Whig political power in 18th century England, the Duke of Newcastle enjoyed the services of a chef named M. Pierre de St.-Clouet until that gentleman decided to cut and run to the service of another, William Keppel (Earl of Albemarle), the Duke’s friend and then the British ambassador to France and later governor of Virginia. Clouet specialized in a form of nouvelle cuisine made popular in the 1730s.

Fortunately, William Verral, who worked as a sous chef with Clouet at the Duke of Newcastle’s estate, wrote A Complete System of Cookery (1759), recording the recipes with which Clouet so enchanted the Duke of Newcastle. Happily, Penguin Books decided to include a paperback reprint of Mr. Verral’s book in its Great Food Series, under the title Recipes from the White Hart Inn. (The Kindle version has been available since April 7, 2011.)

The recipes hide a most delicious, gossipy story.

Human nature being what it is, regardless of era or place, the Duke of Newcastle complained to his friend Albemarle that he needed a new cook, badly. Since Clouet, the object of his despair, worked for Albemarle, for whom the situation could have been anything but comfortable, Albemarle consulted Clouet on the issue. Together they came up with a chef named Hervé (Hervey in Franglish).

But, alas, like Cinderella’s ugly older sister mooning over the handsome fairy-tale prince, Hervé couldn’t capture the heart of the Duke. And this is where the story really becomes a classic: Newcastle wrote (in French) to his old cook, Clouet, pouring out his soul:

“It may be that the new cuisine does not please us here, but I cannot believe that he [Hervé] has mastered the art. His soups are usually too strong and his entrées and entremets are so disguised and so mixed-up that nobody can tell what they are made of. He never serves small hors d’oeuvres or light entrées, and he has no idea of the simple, unified dishes that you used to make for me and which are so much in fashion here, such as veal tendons, rabbit fillets, pigs’ and calves’ ears, and several other little dishes of the same kind. . . . In other words, he has no resemblance to your ways and your cuisine, and to what I require.”

“As regards his mixed-up entrées and entremets, French cuisine has never been anything but mixtures. This is what gives it that great variety which places it above all the other cuisines of Europe. Masters who do not like these mixtures should be so good as to inform the cook of this, and to let him know how they wish to be served, so that the cook can show his skill by conforming to their desires.”

And so it went for the Duke of Newcastle, who wished to both impress his guests and conduct political shenanigans at his dinner table.

And that’s why it’s fortunate that Will Verral put pen to paper. With Recipes from the White Hart Inn, modern readers get a taste of what the Duke of Newcastle missed as he watched Clouet abscond to the household of his friend Albemarle.

Mr. Verral began his book with a haughty sniff at the ragtag equipment that passed for a batterie de cuisine in even upper-class English households of the times. Stir in the English and French antagonisms brought about by long enmity, and you have indeed a fine kettle of fish.

Here’s what our Will said to the cook in one such establishment, he being hired to cater for a large party, he being a publican with his family’s White Hart Inn, which still stands. The passage reads like a skit on “Saturday Night Live,” with Will Ferrell winking and quipping:

“Pray, Nanny, says I, where do you place your stewpans, and the other things you make use of in the cooking way?

“La, Sir, says she, that is all we have (pointing to one poor solitary stewpan, as one might call it,) but no more fit for use than a wooden hand-dish.

“Ump, says I to myself, how’s this to be? A surgeon may as well attempt to make an incision with a pair of sheers, or open a vein with an oyster-knife, as for me to pretend to get his dinner without proper tools to do it; here’s another stewpan, soup-pot, and any one thing else that is useful; there’s what they call a frying pan indeed, but black as my hat, and a handle long enough to obstruct half the passage of the kitchen.”

Mr. Verral, you learn as you turn to the original title page of his A Complete System of Cookery (1759), spent time—likely two and a half years—as the sous chef of “the celebrated Mr. de St.-Clouet, sometime since Cook to his Grace the Duke of Newcastle.”

A few days after the dinner he served in spite of Nanny’s “poor solitary saucepan,” Mr. Verral ran into the gentleman at whose house he’d cooked:

“Will, says he, why here you have made a strange racket at our house. My maid talks of nothing but you; what a pretty dinner you sent to table, and so easy, that it seemed no more trouble to you than for her to make a Welch rabbit [sic]; but says, that if she had such a set of kitchen goods as yours, and a little of your instructions, she could do it all very well.”

Mr. Verral then proceeded to describe how the English noble kitchen might attain the heights of gastronomical bliss afforded by following in the footsteps of French chef M. de St.-Clouet. Of course, he’s a bit apprehensive about what Clouet might say:

“What my friend Clouet will say when he hears of this rash adventure of mine [publishing the cookbook] I cannot guess; but this I’m sure of, he’ll be my voucher that it is all authentic.”

Although Mr. Verral’s book never enjoyed the popular acclaim handed to Hannah Glasse’s The Art of Cookery Made Plain and Easy, Recipes from the White Hart Inn / A Complete System of Cookery affords a glimpse of the types of dishes that led Thomas Pelham-Holles, Duke of Newcastle, to plead like a spurned lover for the return of his chef, that remarkable M. Pierre de St.-Clouet.

One of the reasons for the lack of contemporary popularity of Mr. Verral’s book might lie in the English preference for heavier food, but also in acrimonious, anti-French reviews skewering Will’s book. Here’s a portion of one, illustrating the differences of social class inherent in the Whig preference for French cooks and others servants:

“With respect to this performance, we wish it may not be said or thought, that more is meant than meets the ear. It is intitled, A Complete System of Cookery; but, what if it should prove A Complete System of Politics, aye, and of damnable politics, considering the present critical situation of affairs! If not a system of politics, at least, it may be supposed to be a political system trumped up in favour of our inveterate enemies the French. Nay, the author forgets himself so far as even to own, in the preface, that his chief end is to shew the whole and simple art of the most modern and best French cookery. Ah, ha! master William Verral, have we caught you tripping? We wish there may not be some Jesuitical ingredients in this French cookery. If there is any thing of that sort in the oven, we hope you have had no finger in the pye.” (The Critical Review, or, Annals of Literature, Volume 8, 1759, p. 284.)

Plus ça change, plus c’est la même chose! Everything stays the same, when it comes to human nature, jealousy, and pique!

Recipes from Will Verral’s White Hart Inn would not be out of place on modern restaurant menus or served in home kitchens: turkey braised with chestnuts, rabbit with champagne and ham hock with peach fritters. Instructions are fairly precise and quantities decipherable enough to make it possible to actually cook from this latest offering in Penguin’s Great Food Series, which also includes books by M. F. K. Fisher, Elizabeth David, Charles Lamb, and Mrs. Beeton.

Re-enactors and others interested in historical dishes and menus will find Recipes from the White Hart Inn a sheer delight. And anyone who likes to cook will find much meat here, too.