Rebels in the Making: The Secession Crisis and the Birth of the Confederacy 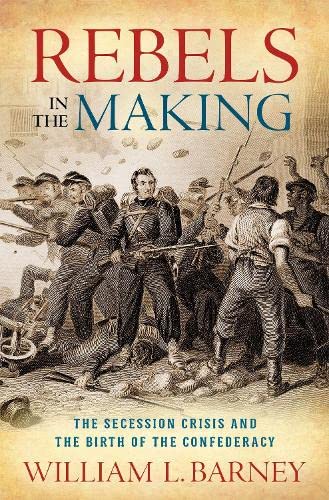 “makes the compelling case that secession was a much more politically complicated process than generally understood . . .”

The root causes and events leading to the secession of South Carolina and the formation of the Confederate States of America are often given a superficial overview in Civil War histories. Professor William Barney corrects this deficiency with this collective look at the remarkably complex set of circumstances that led the leaders of the secession movement to split the United States.

By examining the entire social and economic picture of the states that would eventually form the Confederacy, Professor Barney presents a picture of a society in both flux and decline, with an elite white planter class trying desperately to maintain their social and economic dominance over the south and by extension, the levers of power within the Federal government.

Using a wide variety of primary diaries, letters, and documents, the author shows the racial, social, and economic relationships between rich and poor whites with both slave and free blacks changed in unexpected ways during the first half of the 19th century as resource-intensive cash crops, a concentration of wealth built on credit and debt, and the need for increasing slavery’s reach into the American western territories created conflict not only between North and South, but within much of southern society as a whole.

The author takes on the twisted and hypocritical moral and economic justifications used by plantation owners to portray slavery not only as economically needed, but morally justified, in spite of the contradiction of slavery to the growing American sense of freedom and justice. As their opinions hardened during this period, these rich and ultra-conservatives whites increasingly tried to use the power of the Federal government to silence their critics and enshrine slavery in the new territories via the Supreme Court and threats of secession.

However, their viewpoint was becoming increasingly questioned by larger segments of southern society that were seeking to further economic development of smaller farmers, tradesmen, and a steadily increasing industrial presence driven by labor, as well as all of the northern states that were picking up the mantra of “free labor and free soil” in the western territories.

There were other economic factors in play as well in the south during this period that only exacerbated the political situation going into the crucial election of 1860. As railroads proliferated, commerce between eastern and western states shot up, diminishing the influence of cotton on interstate commerce.

In addition, a prolonged drought in the south through that year caused significant food shortages among poor southerners, which became fertile ground for agitators to stir up them up to support secession as the only solution for the long-term economic survival of the south. Combined with the constant stoking of fears of a slave insurrection and race war and the path from Lincoln’s election to South Carolina’s secession seems clear.

Although Lincoln made clear throughout the election year that he had no desire to interfere with slavery where it existed, his staunch opposition to slavery’s expansion alarmed the planter class who correctly assumed that if slavery did not continue to expand along with new land to grow crops such as cotton and tobacco, the entire economic underpinning of slavery would begin to falter. They saw this as a clear effort at abolishing slavery by confining it to the current south and were determined to oppose this action.

But even after South Carolina’s initial action in 1860, the path to a viable Confederacy was not assured. The upper southern states, particularly Virginia and Tennessee, voted down several secession measures as many southerners believed that compromise was still possible. Professor Barney does an excellent analysis of these many efforts by the lame-duck Congress, all of which come to naught when Lincoln and the Republicans stood firm on the issue of expanding slavery into the territories.

The author closes with the Fort Sumter crisis that caused the major states of the upper south to finally secede when Lincoln calls for volunteers to suppress the rebellion and enforce Federal law, beginning the Civil War in earnest.

The author makes the compelling case that secession was a much more politically complicated process than generally understood. Although slavery was at the root of the endeavor, there were a number of other contributing factors that allowed the planters to rally poor whites to the cause as well.

In addition, his analysis shows that it was not as popular across the south as generally assumed, with the western counties of Virginia in effect seceding from the state to become the new state of West Virginia in 1863 and significant portions of Tennessee and other states retaining strong Unionist sentiment throughout the war.

The Civil War was indeed a defining event in American history, and this book is one of the best overall analysis of why it began.