Rebel of the Sands 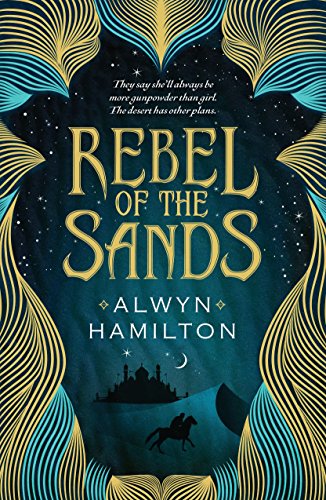 With gun slinging, gin drinking, cursing, prostitutes, desert towns, and good guys versus bad this meets the criteria for a good western. Interestingly, Hamilton has mixed in the magic and the setting of the Middle East. Hamilton’s world building is well done, even if the names really oversell the American Western and Middle East themes (Dusty Mouth, Deadshot, Dustwalk, Miraji); however, readers will be right there with the characters and will be too busy enjoying every moment to notice too much.

The story is narrated by young Amani looking to flee her Uncle’s house in Dustwalk, and the boredom and monoculture of the town. Amani is a sharpshooter and uses her talents, which she hides because she is a woman in a patriarchal culture, to enter a shooting contest and win the money that will help her out and into a new world and a new life where she can be who she wants to be.

Amani’s tyrannical uncle needs to find a husband for his niece and soon settles upon the idea of marrying her himself, much to his first wife’s disgust and anger. Aunt Farrah, never Amani’s friend, is eager to punish the daughter of her hanged sister for any slight transgression. Now that Amani has snuck into a shooting contest dressed as a young boy and has stolen the money and her uncle’s horse Blue, she will be lucky to survive the beating waiting for her if she doesn’t win and leave.

In the mix of Amani making her escape into Izman is a prince looking to take back his throne after being usurped. There is intrigue and romance as well as a couple of strong female protagonists for current fiction. Amani has a love interest in Jin (a nickname that doesn’t have anything to do with his having magical powers, unless Hamilton lies in her narrative and changes her tune in the next book). Amani and Jin have plenty of chemistry, which will be a delight for readers who enjoy the titillation of budding romance in their fiction.

Hopefully, though, Hamilton, or her editors, will strengthen her fight/action scenes, which end up choppy in her attempt to keep the readers invested in the shooting and scimitar play. The writing becomes a muddled conglomeration of phrases and half-finished thoughts as Hamilton tries to race alongside her protagonists.

This is the best of American Western and Arabian myths, and is a must read for fans of YA fantasy fiction. Each chapter brilliantly ends in a cliffhanger and will leave readers unable to put down this novel. Hamilton’s style is reminiscent of the American Western in its clipped narrative language and simple syntax, and Hamilton’s descriptive powers will suck readers in instantly. Readers will be emotionally invested in Amani and eager to find out what lies in store for this spirited young woman. This is the first in a trilogy, and it is hopeful that Hamilton can keep up with the pace she has set.