The Reason You're Alive: A Novel 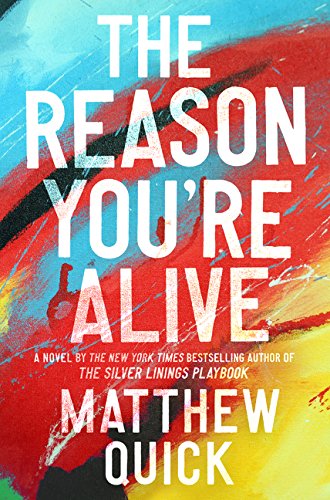 “a poignant work and a must-read this summer.”

David Granger is everything you want and love in a novel character: xenophobic, racist, and homophobic. Prone to political and “patriotic” rants, oddly befitting of the times we live in, Granger seems like one of those people whose downfall or at the very least live roasting on social media, we can’t wait to see. Yet in his new novel, The Reason You’re Alive Matthew Quick is not only able to make us not hate him—at least not completely—he allows us to actually sympathize with Granger. A book of unexpected turns, a fun and funny narrative intermixed with many dark plot lines, The Reason You’re Alive is a poignant work and a must-read this summer.

To back up, David Granger is 68-year-old Vietnam war veteran who at the start of the novel is in a car accident. Though he survives the accident, Granger finds out upon being admitted to the hospital that he has a brain tumor and needs immediate surgery, a development he attributes to the Agent Orange he was exposed to during the war. Granger is soon wheeled off into surgery. When he wakes up, he does so muttering a name of someone he hadn’t thought of in years: Clayton Fire Bear.

Clayton, a fellow war veteran, was a Native American soldier that Granger disciplined during the war. Granger now finds himself constantly thinking of Clayton, weighed down by guilt, not really because he had disciplined him but because he stole something precious to Clayton during the war. Determined to find some closure in his life after the war and simultaneously coping with his wife’s untimely death, Granger resolves to find Clayton and return what was stolen. Thus begins his hectic, if a little bizarre, journey.

No Matthew Quick novel would ever be complete if it didn’t include an array of entertaining and interesting characters, as well as dysfunctional family relationships. Enter Granger’s son Hank whom he frequently patronizes and doesn’t really get along with; Hank’s seven-year-old daughter Ella whom Granger loves unconditionally; and, eventually, Clayton who as it turns out used to collect scalps during the war.

A large part of what makes the book comes from Granger’s relationships and interactions with these people. Because Granger is prone to many politically incorrect rants, which are laced with cynicism and prove to be electric, seeing him trying to communicate with his more socially conscious son proves highly entertaining. It’s these kinds of dialogues and narratives that capture the turbulence of our times so realistically. Matthew Quick does marvels in reflecting the gaps in our thinking and interactions while using the conflicts that rise out of those gaps to propel the story forward. And keep the readers engaged.

Yet for all of that the book never allows Granger to become a wholly unlikeable character. His unequivocal love for Ella and his devotion to his wife serve as qualities that deeply humanize him. Another factor that serves this same purpose is the very fact that he undertakes his quest to begin with. By acknowledging his wrong, even if he does so many years after the fact, prevents Granger from becoming a one-dimensional character and instead turns him into an intriguing embodiment of ongoing conflicts.

With all the issues that the novel seems to tackle from racism to PTSD to the U.S.’ treatment of war veterans and to depression and adultery, one would expect The Reason You’re Alive to be a highly depressing work as well. This expectation, however, would prove entirely wrong as the novel is at times very humorous.

A large part of the humor stems from Granger’s rants and the perspective from which he sees the world and how those perspectives clash with those of others. In short, the witty narrative broken up with Granger’s opinionated rants and healthy dose of cynicism help to alleviate the dark mood of the novel where necessary. By striking a delicate balance between the funny and the serious, the violence that has colored the life of this character and the relative peace that reigns over the rest of the book give the novel a strength that it might not have otherwise had.