A Reason for Hope 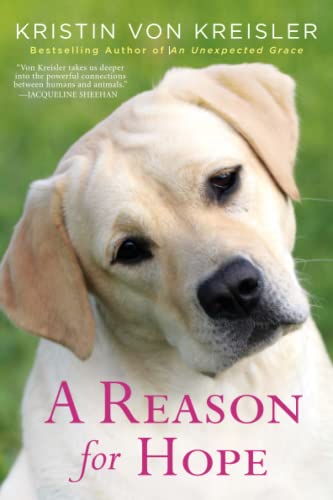 Why is sexual abuse so rampant? More troubling and frustrating is the victim's difficulty finding justice. It often turns into a case of "he said, she said," and unless there is definitive proof of an attack, the man (predominantly males commit these atrocities) usually gets away with his crime, leaving the one suffering to live in guilt and shame even though this horrendous act is not their fault.

Thirty-six-year-old Tessa Jordan is a librarian driving the bookmobile she’s named "Howard" to remote areas of San Julian Island in Washington State. She loves her job and the people she meets, and her life is fulfilling, even though her antagonistic mother constantly harasses her about not being married. This bothers Tessa to a degree, but she is happy they reside on opposite coasts, so she is in slight contact with her mom.

Tessa's outside activities consist of spending time with Emma, her best friend, and caring for seven feral cats living in the woods behind her cottage. She forms such a bond with them, naming them after authors, and she treats them with special meals she concocts just for them. She adores these felines, though worries about them, and because they are wild, she knows they cannot be domesticated, so she fears for their safety.

One day, against Tessa's better judgment, Emma encourages her to sign up with a dating site called Northwest Singles, Emma insisting she needs a life other than the library, the cats, and her. Tessa is surprised when she gets an email from Nicholas Payne, a well-known island resident who is running for a term in the City Council, and she agrees to meet him for a glass of wine at Planet of the Grapes, located downtown.

Realizing Nick is somewhat of a celebrity, not only because of his attempt to gain a political office, but because he also is a revered college professor, she wonders if they will be compatible. After all, she considers she is only a librarian, and his "status" is far above hers. But their meeting goes well, and they enjoy each other's company.

As they leave, Nick invites her to his house the following Saturday, as his brother and his wife are coming for a barbecue. Pleased, Tessa accepts, but when she shows up at his home, he confesses his guests canceled at the last minute. So it is just the two of them. Before dinner, Nick offers Tessa wine, and they sit on his deck. As Tessa sips her second glass, she begins to feel woozy, believing it is because she hasn't eaten all day.

Tessa next wakes up on Nick's bed, naked and achy, not knowing where she is. She dresses quickly and rushes out of his house. When she arrives home, she is bruised and sore and realizes she was drugged and raped and cannot remember anything after drinking the wine Nick provided for her.

Safe at home, she crawls into bed:

"Feeling dirty and disoriented, Tessa checked her watch—four o'clock! She's slept all afternoon. Gingerly, she climbed out of bed. On her way to the bathroom, she saw that in this morning's haste, she'd put on her long-sleeved striped T-shirt inside out. When she pulled it over her head and dropped it into her wicker laundry hamper, she noticed five fingerprint bruises on each upper arm. Mick must have gripped her and held on.

"Something was wrong. No, more than wrong. Something was disturbing, unnerving. From the bathroom mirror, glazed eyes stared back at Tessa. It seemed as though inside her, nobody was home. Except for forehead creases, her face seemed as blank as the expanse of time that her mind could not recall."

Later that evening, when Emma calls, she insists Tessa report the rape to the police, but Tessa wants to crawl into bed and lick her wounds. After much arguing, Tessa agrees to file a report, and Emma accompanies her for moral support.

Tessa meets Detective Sandy Johnson from the prosecutor's department, who offers her sympathy and understanding. Also in the office is a Labrador Sandy states is a therapy dog named Hope, and she is one of her handlers. She tells Tessa that Hope is trained to love people and offers consolation to those who are upset.

After reciting her assault, Tessa reluctantly agrees to be photographed and tested, hoping they can put this creep away for a long time. Unfortunately, Tessa has showered off any DNA and waited too long for a blood test to determine if she was drugged.

Tessa is discouraged and very angry when she learns there is not enough proof to substantiate an arrest. She takes out her anger on the phone at Will Armstrong, the lead prosecutor, when he tells her he cannot pursue her case. Hope's loving administrations are the only thing that soothe Tessa.

Will is an ambitious lawyer determined to nail the bad guy, but he is powerless, knowing he can do nothing without firm evidence. If only Tessa could understand this and accept that justice doesn't always prevail.

Will lives alone in a rambling though ramshackle farm with a lot of land—an excellent place for Hope to run. Then one day, while in his barn, he notices rat droppings. Seeing the building is practically falling to rubble, Will doesn't know what to do. His busy schedule does not allow him time for repairs.

The sheriff visits informing Tessa her neighbors are complaining about her cats and states she must be rid of them within a specific time. Tessa understands if she cannot find homes for them—for no one wants feral cats—they will be euthanized, and she can't let that happen. She spends the short time until her deadline trying to place the felines or find someone to foster them, but without luck.

Her last chance is to put up notices, and she is doing so on the board at the local grocery store. She bumps into Will, unknowing he is the one who turned down her case. Upon seeing her post, he feels empathy for the woman he doesn't realize is Tessa, and he blurts out an offer to house the cats at his place. This may be the answer to his rat situation, and the animals would be able to roam and seek shelter in the barn from inclement weather. They are both shocked when they learn the other's identity yet know this will solve both their problems.

As Tessa tries to pick up the pieces of her life, her anger simmers. How can a man who is considered a pillar of the community get away with what he did? How many others did he violate? Through her attendance with a survivor's group and her occasional meetings with Hope when she feeds her cats, she tries to return to normal—though Tessa believes she will never be normal again.

This novel delves into the injustice of sexual crimes and how difficult it is for law enforcement to convict perpetrators; more importantly, what this does to the victim is abhorrent: It takes away their confidence, their trust, and their self-respect.

Though a complex topic is addressed, it is made a bit comforting by having Hope support those who have been sexually abused. Her personality, revealed as though she is human, offers hope to this situation—an apropos name for this canine. A Reason for Hope is a difficult read, especially for those who experience this trauma, yet it is enlightening, informative, and well-written.