From the Realm of a Dying Sun. Volume 1: IV. SS-Panzerkorps and the Battles for Warsaw, July-November 1944 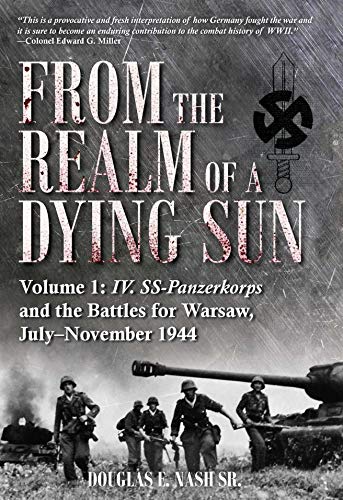 The summer of 1944 was a chain of disasters for the German war machine. Although multiple volumes have been written about the Allied landing in Normandy, the fierce fighting in the bocage, and the British and American race across France and Northwest Europe, the actions on the Eastern Front that summer have received much less attention.

But the Soviet summer offensive, known as Operation Bagration, was an even more crushing blow to the Germans, as an entire Army Group was destroyed in a massive battle that dwarfed the fighting in France in terms of men and tanks. This detailed new book picks up right after that massive offensive rolls out of Russia and into Poland, combining unit history with battle narrative to tell the story of the IV SS Panzer Corps in the fighting around Warsaw and the Vistula River in the late summer of 1944.

The Waffen-SS was the military arm of Reichsführer Himmler’s notorious SS and Gestapo organization, formed into armored and mechanized infantry divisions to fight alongside the regular German Army. The corps was composed of ardent Nazis, specifically the 3rd and 5th SS Panzer Divisions. Each of these units were unique within the Waffen-SS hierarchy, the 3rd Division being composed of former concentration camp guards and the 5th Division being composed of foreign volunteers from across Europe who volunteered to fight the Soviets.

However, both units had also been through heavy combat during the retreat from Russia and were under strength when called upon to slow the Red Army onslaught to allow time for the battered remnants of the German Army to regroup.

The author has amassed an amazing amount of source material and includes a sometimes hyper-detailed description of the German military staff structure and personnel at the division and corps level that may bog down the average reader. The author has also chosen to use the German abbreviations for ranks and military terms that can also be challenging to decipher at times.

But the battle narratives are first rate and show that even in the summer of 1944, the German military machine was still operationally lethal, conducting slashing counterattacks to blunt the first Soviet drives on Warsaw and potential Vistula River crossings.

However, the heavy losses suffered through the summer left the German 9th Army infantry units severely mauled, with few replacements available as the fighting ground on across Europe. This had a cascading effect on the remaining armored formations like the 3rd and 5th SS Panzer Divisions, which were used to close gaps in the German lines and often committed piecemeal to plug breakthroughs. Besides the heavy combat losses, these constant efforts also ground down the divisions through mechanical breakdowns that were challenging to repair under the often fluid conditions of the battlefield.

Even though the Germans maintained their operational prowess, their efforts were like a boxer against an elephant. While the boxer was more nimble and could stun the elephant for a short time, the inexorable movement of the elephant could not be stopped. The Soviet Red Army was able to sustain massive losses in tanks and men that summer while maintaining the strategic initiative and relentlessly wearing down the Germans as they pushed closer to the German homeland all across Eastern Europe.

However, by shortening and thinning their lines, and by continued use of mobile counter-attacks, the Germans, with the help of Panzer units like the 3rd and 5th SS Divisions, were able to restore some stability to their lines around Warsaw and bring the triumphant Soviet summer campaign to a close as winter set in.

Both divisions had suffered tremendous casualties in the five months of fighting around Warsaw with very minimal replacements, and the replacements they did receive were substandard, including former Luftwaffe personnel. Although the corps ended this campaign with a successful defense, the Red Army merely paused to regroup and resupply through the bad weather and even more difficult fighting was expected in the spring of 1945.

This book is definitely written for grognards, with a level of detail and trivia that would make David Glantz, the dean of Eastern Front operational history, proud.