The Real Traviata: The Song of Marie Duplessis 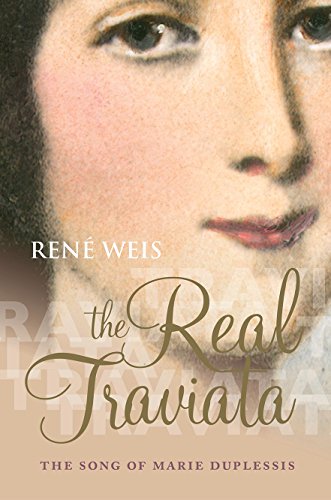 “Weis’ book is particularly fascinating in offering a detailed picture of the place of the courtesan in 19th century Parisian social life.”

First published in 2015, The Real Traviata is an exhaustive study of the famed French courtesan Marie Duplessis, the inspiration for Alexandre Dumas fils bestselling roman a clef, La Dame aux Camelias, which the author later successfully dramatized. Giuseppe Verdi, the reigning Italian composer of the time, saw the play and almost immediately began work on his operatic version, La Traviata.

Duplessis’ story is a true rags-to-riches fable. Destitute in childhood, abused and pimped out by her own father, who eventually moved her from the countryside to Paris so she could make more money for him, Duplessis quite quickly became the most sought after courtesan in Paris. She became the darling of the aristocratic members of the Jockey Club. An early lover taught her social graces and introduced her to the arts.

From that point on, Duplessis was able to hobnob easily with nobility and with artists like Dumas and Franz Liszt. She lived in splendor and dressed magnificently. One of the most interesting aspects of her short life was her refusing the chance to be adopted into English aristocracy by a woman who had befriended Duplessis’ mother. Marie knew that she didn’t belong in that world. Parisian nightlife was her milieu and she was generously supported by her admirers. After her death from consumption at age 23, people flocked to the auction of her estate in order to see her apartment and her belongings.

The fact that Duplessis was a Parisian celebrity says something about society in that time and place. Most of Duplessis’ lovers were married; nonetheless, they appeared with her at the theater, the opera, and some social events. Courtesans like Duplessis were part of the social fabric, generously supported by their lovers. Unlike Verdi’s Violetta, his version of Duplessis, who dies in relative poverty, the real Marie was tended and supported by her lovers during her illness and openly mourned by some of them who appeared at her funeral and burial.

The last third of The Real Violetta offers history and analysis of the works by Dumas and Verdi that Marie Duplessis inspired. Since Dumas fils was one of Duplessis’ lovers, Weis is most interested in the relationship between memory, fact and fiction in Dumas novel and play.

The model for Armand was not the author but a young aristocrat from a conservative family. Weis does not deal with the classic film version of La Dame aux Camélias. The closing chapter on La Traviata includes commentary on some recent productions and performances.

The Real Traviata is not the first book to focus on Marie Duplessis. Her dear friend, admirer, and sometime attorney, wrote a biography, The Truth of the  Lady of the Camelias, in 1888, long after Dumas’ novel and Verdi’s opera. That book was never translated into English but is cited a good deal in Weis’ book.

Weis, however, has been much more exhaustive in his research. His book is an admirable work of scholarship, though some of Weis’s assertions are conjecture. The volume is richly illustrated. The Real Traviata offers fascinating background to two classics of the mid 19th century. For this reader, Weis’ book is particularly fascinating in offering a detailed picture of the place of the courtesan in 19th century Parisian social life.