Reading Between the Crimes (A Jane Doe Book Club Mystery) 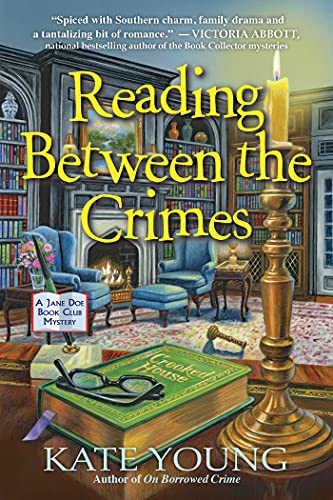 “keeps the reader guessing who the real culprit is, and the reader will be satisfied with the outcome. The required dramatic climax is harrowing and well written.”

Cozy mysteries are formulaic in structure—all much the same. Female protagonist, single, 25–50-ish; works for a small organization, bakery, bookstore, craft store, library, or such; best friend may be a school friend or relative; police authorities are either inept or in a relationship with the main character, but generally don’t put a lot of effort into solving the crime.

The crime is murder and usually happens within the first one or two, maybe three chapters, and the protagonist believes she is the only person who can solve the crime. If the murder does not occur until page 125, then the story is already lost.

The thing that makes one cozy really good and another not so much is the author’s ability to write the story in a style that stays focused, creates strong characters, and engages the reader from beginning to end.

It can be said that Kate Young, author of Reading Between the Crimes has achieved that goal.

Her story begins with the main character, Lyla Moody, partner with her uncle Calvin in a private investigation firm, preparing for the regular Jane Does Mystery Club meeting. The book the club will be discussing is Crooked House written by Agatha Christie.

Now this is the only drawback to the story. As the story unfolds, Lyla sees close comparisons between the crime that occurs in her small town, and the plot in the book. If anyone has not read Crooked House, they will be challenged to make the comparison, and Young does not spend a lot of time helping the reader with this.

But the reader should not let that stop them from reading this book.

As Lyla plans for the mystery club meeting, she is joined at the library by Harper Richardson, a friend who works at the library and is found to be in distress. As Harper begins to ask Lyla for help in finding a missing relative, they are interrupted, and the conversation is not completed.

It is several days later at a large party thrown by Lyla’s parents, that Harper’s husband, Leonard, is found dead, murdered in one of the rooms of Lyla’s parent’s house. It does not take long for Detective Battle to zero in on Harper as the prime candidate due to her faltering marriage to an older man, and the rumors of her affair with her husbands’ son from another marriage.

Lyla refuses to accept that Harper could be guilty, and she is frustrated that Detective Battle does not even look at any other possible candidates. Here Young introduces the reader to a number of other characters, each of whom represents a good possible contender for the guilty party.

Young introduces one of many twists in the story when Lyla’s mother, normally a well-put-together southern lady, takes an interest in Harper, a virtual stranger. As Lyla tries to understand this budding relationship, a mysterious character, Charles Harwood, a writer with no credits to his name, appears trying to rake up muck about the residents of the town for a tell-all book he plans to write.

As the story unfolds, Charles becomes murkier as he tells Lyla that she doesn’t really know her family, nor even who she is. When Lyla tries to dig to the bottom of her family’s history, she is blocked by both her mother and her uncle.

In the meantime, when Harper is arrested and charged with murder, Young introduces the reader to a bevy of nasty characters, all part of Leonard Richardson’s family, and all who want Harper out of the way so they can get to Leonard’s fortune.

It should be noted that Young also introduces several characters who support Lyla’s efforts to hunt down the real criminal, including her current love interest Brad, and her ex-love interest Quinn, the police chief. Although Quinn attempts to help Lyla through this situation, neither of these characters is strong. That, however, is how it is in a cozy.

Young is very good at building strong scenes with heavy tension through the characters she’s developed and the frustrating family issues that Lyla can’t resolve.

The story arc is fast paced; there are no side trips taking the reader down a path of unresolved issues. As the story progresses, Young creates numerous situations including an attack on Lyla, her mother offering an inhouse residence for Harper on bail, an arson fire at Lyla’s place of business, a near-violent encounter between Charles Harwood and Lyla’s uncle Calvin, and an encounter with Leonard’s young daughter in which Lyla receives stolen goods that should prove Harper’s innocence.

In spite of these many twists and turns in the story and including family secrets, Young stays focused taking her reader down a perilous path from beginning to middle to end.

As mentioned above, the quality of the cozy depends heavily on the author’s writing style and skill with words. If the author sticks to the story arc, adds the appropriate red herrings, clues, and foreshadowing, chances are the book will be a fast read.

Young has accomplished this with ease. She keeps the reader guessing who the real culprit is, and the reader will be satisfied with the outcome. The required dramatic climax is harrowing and well written.

Fans of cozies will enjoy this story and look forward to whatever is next from Kate Young and her protagonist Lyla Moody.