Read Dangerously: The Subversive Power of Literature in Troubled Times 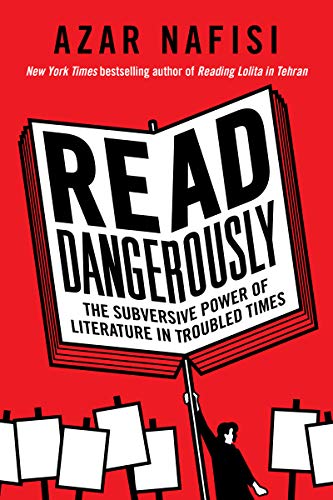 “A contemporary treatise on oppression wherever it exists, Read Dangerously raises Nafisi to new heights in the contributions she makes to writing and political analysis.”

Reading Lolita in Tehran is likely to be the book that introduced Azar Nafisi to most American readers. It was certainly a gateway for readers into her life of resistance as a compelling writer, a gifted teacher, and an admirable activist. Now comes her latest book in which she connects great literature to the language and philosophy of resistance in the cause of human rights. A contemporary treatise on oppression wherever it exists, Read Dangerously raises Nafisi to new heights in the contributions she makes to writing and political analysis.

Structured as five long letters to her late, much-loved father, also a reader, resister, activist, and politician, she finds her way to deconstructing the works of such diverse writers as Salman Rushdie, Plato, Toni Morrison, Margaret Atwood, James Baldwin, and Ta-Nehisi Coates, among others. In doing so, she develops her gifts as writer, teacher, and thinker to illuminate the lessons of literature at a time when the state of the world seems bleak.

In her introduction, Nafisi states her purpose clearly. “Literature,” she says, “teaches us how we are compelled to act in certain ways, leading to the question, ‘How do we change the world?’” That takes her to a more fundamental question: “How do we change ourselves?’” Thus she makes clear that in her view “literature [itself] as resistance” is more important than “the literature of resistance.”

Nafisi is an Iranian American who now lives in Washington, DC having left Iran originally to study in the US. Later she fled the Islamic Republic and returned to America where she is now a citizen. She has been an astute observer and critic of political realities in both countries and finds her way to her own thinking by way of great works of literature as she analyzes the events of Iranian history along with that of current events in America.

Here, for example, she reflects on the similarities between Ayatollah Khomeini’s rise to power in Iran and Donald Trump’s stunning emergence in American politics. “What if we had not remained silent and complicit?” she asks her father rhetorically. “There are lessons here for those who live in democratic societies, who fail to see the creeping, insidious signs threatening an open society. ‘How could such a thing happen in Iran,’ they ask innocently. One could respond by asking ‘How could Trump happen in America?”’

Her further examination of Rushdie’s work Satanic Verses takes her deeper into her analysis. “Trump saw an opportunity [when] a large number of people were deeply unhappy with the state of the country and lacked confidence in the political establishment. He understood how to captivate the media and to use their obsession with him to his advantage. He entertained us with his buffoonery and this blinded us to what was really happening.”

In processing America’s racism at the heart of violence in this country she looks to James Baldwin and Ta-Nihisi Coates for understanding. Both writers, she says, “believe that there is no inherent biological basis to race and that white and Black are political constructs, a ploy created to ensure subjugation of one group of people by another. . . . The way I see it, racism is a way to redefine a people, to keep them frozen withing that false definition. . . . It is a violence that corrupts the soul.”

Reading Dangerously is a political writer’s brilliant attempt to understand historical and political events, as well as human nature, such that one feels her struggle to offer honest, well considered suppositions. Her carefully chosen words and her attempt to articulate cogent analyses ultimately lead readers to deeper understanding of the importance of literature as an act of resistance.

“I really believe that books might not save us from death,” Nafisi writes in her final letter to her father, “but they help us live and live with hope, trying to link what Baldwin called ‘the possibilities of books’ to the ‘impossibility of life.’”

At the end she concludes that “when it comes to freedom, writers and readers are joined at the hip, for the freedom of one guarantees that of the other. . . . Great works of fiction are about revealing the truth, [and] great writers . . . become witnesses to the truth; they do not, cannot, remain silent.”

These words perfectly describe Azar Nafisi’s passion for truth and her mission as a writer. They also bear witness to her many gifts as a critical thinker and a gifted literary figure.