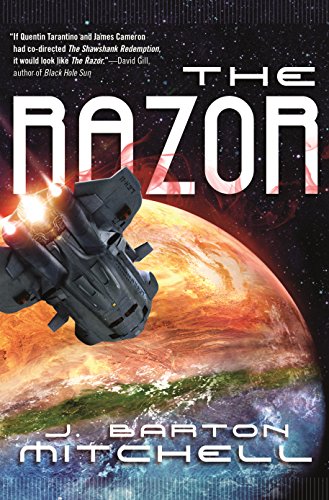 “The Razor is science fiction written at a thriller pace. Short chapters, shifting points of view, escape after escape, escalating tension, and lots of cliffhangers keep the pages turning.”

The Razor is the name given to a narrow slice of habitable land on 11-H37, a planet that does not rotate. Bookending this bleak stretch of land are the scorched hellscape of the Cindershpere, the hemisphere that always faces the sun, and the frozen wasteland of the perpetually dark Shadowsphere. 11-H37 is also a rich source of xytrillium, the source of the most coveted fuel in the galaxy. Here, inmates are sent to live out the remainder of their lives mining xytrillium deep in the inhabitable zone.

“Utter darkness on one side, raging heat on the other. He could just make out the slim streak of green that split the two massive halves. It looked tiny, nestled precariously between its giant siblings. It looked like it was being crushed.”

Life in the Razor is typically short and brutal. The equipment is dangerous, the setting unforgiving, and danger lurks around every corner in the forms of staff members and gangs of fellow inmates. If a prisoner can’t find a way to make him or herself valuable to the people in power, that inmate is disposable.

“A slight smile formed on the captain’s face. “He profited me nothing . . . and so to me he did not exist.”

The two protagonists, Flynn and Maddox, arrive on the same day and share a brief exchange before their paths diverge. Flynn is a talented engineer and a former employee of the company that holds mining rights on 11-H37. Unable to offer much physically, or even defend himself, Flynn must make himself indispensable through his extensive knowledge of the planet, systems, and equipment.

Maddox, a former guard at the prison, has no allies, neither among the inmates he once oversaw, nor among the former colleagues who view him as a traitor.  How these two convicted murderers ended up on this planet, and why, provides the mysteries that enrich the plot.

Flynn and Maddox soon cross paths with Key and Raelyn, respectively. Each is a strong character with strengths that complement her counterpart. Key, a long-term inmate, exemplifies the classic “badass” trope, while Raelyn is a physician.

When things go very wrong, the staff evacuates, leaving all the prisoners behind to die.

The two plot lines eventually converge and the four characters join forces. As they struggle to outrun an approaching firestorm, elude gangs of desperate inmates, fight off or escape unspeakable horrors, and find a way off the planet, they peel back new layers of mystery about what is really happening on 11-H37. Each character has her or his own agenda, and the alliances they form are tenuous, rising out of mutual need. The potential for betrayal is high throughout the story, adding a layer of tension.

The setting is well-realized. Although the reader never experiences the Shadowsphere, Mitchell paints a striking portrait of the Cindersphere.

“The Cindersphere’s landscape was burned clean of anything remotely alive. Jagged mesas and canyons stretched into the far distance, red silhouettes against a darker red sky. The star hung far above the horizon now, a giant orb of blazing red energy, and it felt ominous, like it was alive and staring through him.”

The Razor is science fiction written at a thriller pace. Short chapters, shifting points of view, escape after escape, escalating tension, and lots of cliffhangers keep the pages turning. Each character also has a mystery or secret which is gradually revealed as the plot moves forward. Mitchell does an excellent job of continually raising the stakes and placing increasingly confounding and dangerous obstacles in front of the protagonists. Highly recommended for readers who love an engrossing story told at a rapid-fire pace.