The Ravine: A Family, a Photograph, a Holocaust Massacre Revealed 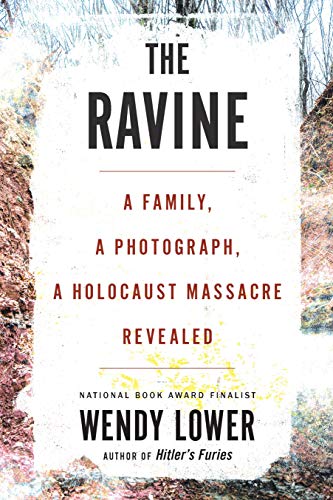 Within an overall historical event are the individual stories. In the case of the Holocaust, there are many that have been told and literally millions that remain to be told in order to obtain some measure of justice for the victims and so that they are never forgotten in the ultimately wider scope of man’s inhumanity.

In this publication, author Wendy Lower has sought to tell not just the story of one incident of genocidal murder but also to attempt to identify the location, victims, and perpetrators as well as other details surrounding this particular incident through one photograph brought to her attention while on a trip involving other Holocaust research.

In her effort to accomplish the identifications mentioned above, in the text, focus is emphasized on individual portions of the photograph in order to point out and enumerate many details, from clothing and uniforms to descriptions of those caught in this moment in time as well as the physical environment of the ravine.

Unfortunately, the reproduced photograph, and smaller portions thereof, does not have the absolute resolution that is really needed, and one is sometimes hard pressed to pick out some of those details without the aid of a magnifying glass, something which is recommended here.

On the other hand, there is much to discern and observe despite the fact that the layperson may not necessarily realize or recognize exactly at what s/he is looking. At this point, this is what makes the text so invaluable as the author is able to guide the reader in many of the details otherwise hidden.

The photograph shows the instant a Ukrainian militiaman, in the presence of two German officers, has pulled the trigger of his rifle, resulting in the death of a woman who stands on the edge of the ravine bending over a small child who is kneeling on the ground. The woman’s head is wreathed in smoke, and the only way to identify her as female is the polka dot dress she is wearing.

Also noticeable is the fact that the woman has yet to show any indication of collapse as a result of having just been shot. Consequently, the photograph has been taken in the absolute split second between the trigger pull and a physical reaction on the woman’s part.

If there is anything fortunate in this photograph, it is the fact that the author was able to trace the location of the ravine through surviving citizens of the town in question, the identities of the Ukrainian soldiers and that the German officers in question were actually customs officers who had been assigned to the Eastern Front as part of the various security and “ethnic cleansing” operation in the rear  in the fall of 1941.

Most tragic of all is that the identities of the murdered family could not be ascertained with absolute certainty. The family joined the others murdered at the location and the unidentified millions found in other mass graves across eastern Europe and western Russia.

There are additional photographs depicting other actions during the original murder, the bodies accumulated in the ravine, a “reenactment” of the murder by the Ukrainian perpetrators and from the investigation conducted at the site by the Soviets in 1986, among others.

Although there is no formal bibliography, the notes contain all of the pertinent publishing information for determining data origination sources and provide additional context as well. It is apparent therefrom that the author has done extensive research in archives and government documents, in addition to having interviewed the one survivor of the killing and others still living from the time period. Ms. Lower has also previously written and published on the Holocaust.

Society returns again and again to the Holocaust, as well it should. Even if victims cannot be identified, it well behooves society to ensure that their stories are told, if possible, and they be remembered even if justice can no longer be enforced on those responsible.