The Raven's Gift: A Scientist, a Shaman, and Their Remarkable Journey Through the Siberian Wilderness 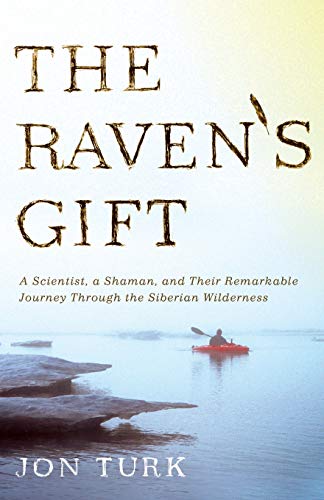 In 1997, one bad decision environmental science writer and adventurer Jon Turk made during his 25 years of backcountry skiing triggered an avalanche that nearly did to him what kayaking and sailing around the Cape of Good Hope and the Arctic rim of the North Pacific would fail to do.

Turk escaped death and paralysis, but he got off lucky with six weeks of rehabilitation and a shattered pelvis, held together by a metal plate. He pressed onward with his adventurous lifestyle, breaking the plate in a mountaineering accident in 2001, and opted to endure the continual pain rather than undertake a risky and potentially futile operation that would interfere with a planned return trip to Siberia.

Siberia, the reader might ask? Turk had a friend there, in the remote village of Vyvenka—more than one, actually—but one who had to be revisited in person, the Koryak shaman Moolynaut, who as near as anyone is able to reckon was born in 1904. When he had met Moolynaut on a prior expedition, driven aground by a storm the villagers of Vyvenka claimed that she had conjured, Turk had been fascinated with her vivacity despite her age, her vast store of Siberian folklore and oral history, and the villagers’ profound belief in the strength of her magic, a depth of faith he had never before encountered among northern peoples in his twenty years of Arctic travel.

The Raven’s Gift interweaves episodes from Turk’s own life with the stories of five visits to the shaman spread over five and a half years. When Moolynaut, in a ceremony invoking the indigenous raven god Kutcha, is able to heal Turk’s pelvic pain permanently, he, too, becomes a believer, and sets out to explore the tundra to understand better the source of her mysterious resilience and power. Despite his best efforts to show respect for the sacred sites he finds, he never feels able to make personal contact with Kutcha.

Years later, though, after Turk suffers a sudden and tremendous personal loss—one of this straightforward memoir’s few major narrative surprises—the raven spirit will call to him again. Turk’s account of his Siberian wanderings is alternately absorbing and didactic. His vivid depictions of the natives, both Koryak and Russian, he meets, several of whom become fully realized characters by the journey’s end, are interwoven with brief excursions into Russian politics, history, and animal biology and conjure an evocative portrait of lives more sparse and elemental than most Westerners can imagine.

But few of his Siberian encounters come across as genuinely transformative. Turk opens the book explaining that he abandoned a career as a research chemist after earning his Ph.D. in 1971 in favor of the less conventional and more adventuresome lifestyle open to him as a science writer—in order to be free, as he puts it later, to smell the earth with his dog. Today he is probably best known for traveling from Japan to Alaska by trimaran and sea kayak, a journey chronicled in his previous book, In the Wake of the Jomon.

It’s hard to see him as a convert from hard-line skeptical rationalism, and casting his story as a conversion narrative requires Turk to drag out at recurring intervals binary oppositions that are too familiar to feel compelling: logic to magic, urban to wild, European cultural imperialism to native love of the land. Near the conclusion, for instance, he exhorts his reader: “Which explanation would you choose? A left-brain world of logic, wrapped in a statistical analysis of the probability of running into a grizzly bear on any given day? Or a right-brain world where magic flies around all the time, waiting to be plucked out of the sky?” Presenting those choices as mutually exclusive does a disservice to Turk’s readers, for it obscures some of the most interesting aspects of his story.

Turk promises Molynoot that he will “try to believe” in the power of her raven god. Then, when he finds himself back home engaging in activities, like skating, that were previously too painful, Turk, remembering his promise, decides against seeking alternate medical explanations for his recovery. He compares it to the moment he decided against continuing on as a research chemist, when he “abandoned rationality because rationality wasn’t the issue anymore.”

There’s a potent lesson here that’s as applicable in the big city as it is in the vast Arctic desert. Rather than choosing between what Turk calls left-brain and right-brain worlds, the reader can choose to have some right-brain moments.

The latent message of The Raven’s Gift is that no one can live an honest life without taking, at some point, such a leap of faith. A cost-benefit analysis, a rational analysis of pros and cons or even the best advice of others will never equip anyone to answer the vitally important questions, “What do I want? What kind of person do I want to be perceived as? What is unique—not statistical, or rational, or representative of a type—about me?”

The answers to those questions do often need to be simply decided, on an emotional basis. Jon Turk found his answers when he decided to heed his dog’s example above the advice of his professor, and those answers ultimately led him to Moolynaut and Kutcha as a source of strength. He has much to say about the value of his particular answers, but doesn’t impress the importance of the initial act of self-affirmation strongly enough. The world probably does benefit from having some genuinely passionate research scientists and city-builders, after all.

Still, a reader whose thoughts drift northward now and then could do worse than fly with Turk and Kutcha a short way to spur on his own process of self-discovery.