The Ratline: The Exalted Life and Mysterious Death of a Nazi Fugitive 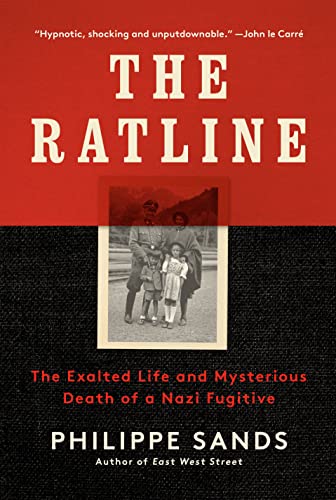 Philippe Sands’ The Ratline: The Exalted Life and Mysterious Death of a Nazi Fugitive, is exhaustive, meticulous and, at times, cinematic.

The late master spy novelist John Le Carre, Sands’ friend and neighbor, who makes a cameo appearance in the book, praised it as “Hypnotic, shocking and unputdownable.”

Sands, an international human rights lawyer, university professor, and documentarian, writes in the introduction that “details matter,” and so they do.

The Ratline focuses on Austrian Baron Otto von Wachter, the son of a WWI general, and an early and enthusiastic Nazi. In 1934, Wachter planned and organized the assassination of Austrian Chancellor Englebert Dolfuss, which facilitated the Anschluss, Germany’s annexation of Austria.

During World War II, Wachter became a dutiful and fast-rising SS officer in his hometown of Vienna, deporting some of his former university professors, two of whom died in concentration camps.

Wachter quickly became deputy to Hans Frank, the Nazi governor of occupied Poland. Under Frank, Wachter administered the Eastern European cities of Krakow, in Poland, and Lemberg, now known as Lviv, which, at various times in its history was part of the Austro-Hungarian Empire, Ukraine, and Poland.

Investigators estimated that between 130,000–530,000 people, including 8,000 children, were killed in the areas administered by Wachter, at his orders.

Frank was indicted for mass murder in Nuremberg and hanged. Wachter was also indicted for the same charge, but unlike him, the Austrian escaped Allied justice.

The “Ratline” of the book’s title refers to the network, abetted by the Vatican and possibly US military intelligence, to spirit Nazi war criminals like Wachter out of Europe in the days, months, and years after the Allied victory in 1945. Known more antiseptically as the “Reich migratory route,” the trail funneled Nazis through Italy to Latin America, especially to Juan Peron’s Argentina, where most of those it aided escaped justice.

(Other Nazi war criminals remaining in Germany, including former SS and Gestapo officers, were recruited by the CIA or West German intelligence in order to provide intelligence on the Russians.)

Successfully eluding Allied Nazi hunters, Wachter hid out on various alpine peaks and in villages until moving to Rome in the spring of 1949. There, he died several months later in a hospital bed under what Sands came to believe were suspicious circumstances. Wachter’s last visitor was an Austrian bishop, Alois Hudal, who was close to Pope Pius XXII.

Both the bishop and the pope were widely believed to have cooperated with the Nazis, in part, they claimed, to protect the Catholic Church in Bavaria and occupied Europe, and to oppose Soviet communism.

Sands’ new book grew out of his documentary, A Nazi Legacy: What Our Fathers Did. The film weaves interviews with Hans Frank’s repentant son, Niklas, who accepts his father’s monstrous guilt; and Wachter’s son Horst, who does not, at least initially.

After the documentary aired, Horst decided to give Sands a bountiful cache of family documents. In 2018, Sands produced an eight-part, BBC podcast series, also called Ratline, which focused on Wachter’s life and death. That research in turn formed the basis of this book.

Wachter’s son was convinced that the material, chronicling his parents’ personal life and his father Otto’s career, would convince the author that his parents were good people.

On one track, Sands is a character in the story, explaining how his meeting with Horst led to their complicated relationship. In the process, the author provides an instructive journalist/researcher’s notebook on how he pieced together such a complex and cold story.

On the book’s second, parallel track, Sands tells Otto Wachter’s story, largely based on the family documents, archival sleuthing, and interviews with aged survivors of the period.

Sands’ first book, the award-winning East West Street: On the Origins of “Genocide” and “Crimes Against Humanity” profiled four people. These include the two jurists, Rafael Lemkin and Hersch Lauterpacht, who popularized the concepts of genocide and crimes against humanity, respectively. The third was Sand’s maternal grandfather, Leon Buchholz. The fourth was Hans Frank, who was responsible for annihilating the families of the other three.

In his new book, Sands relies heavily on the Wachter family papers—letters, diaries, taped interviews, and reminiscences. “The documents and tapes spoke for themselves, then and now,” he writes.

While invaluable to telling the story, this reliance has a downside, as Sands acknowledges. In part, and perhaps inevitably, he told his BBC producer, the book is “a sort of Nazi love story” between Wachter and his wife Charlotte. In some eyes, this may humanize a disreputable couple who nonetheless cared deeply for one another.

Charlotte Wachter’s recollections, Sands writes, amount to “a private act of memory, but also an expression of advocacy” for both her husband and herself, each lifelong, unrepentant anti-Semites. Also, Sands admits that Charlotte may have destroyed or “filleted” damaging material from the papers, including photos of Otto Wachter with Hitler.

Wachter’s wife and son Horst repeatedly describe Otto as “charming.” Horst, who was too young to know his father, said he had “a big, great personality.” Yet the cold, bloodless, womanizing Wachter portrayed by Sands in the book personifies what Hannah Arendt called “the banality of evil.”

The final section of Ratline deals with Sands’ efforts to pursue Horst’s belief that his father did not die of the vague diagnosis of a liver ailment listed on his death certificate. Rather, the son came to believe that his father was poisoned, possibly by an SS major he thought was his friend, but was actually an Allied informer.

As it happens, John Le Carre—David Cornwell in real life--began his intelligence career in Austria as a young army officer in 1949, an experience that formed the basis of his novel, A Perfect Spy. Over tea and cakes at the novelist’s house, Cornwell reviewed some of Sands’ research. Without evidence, Cornwell then pronounced himself convinced that Wachter had been killed in “a Jewish operation” carried out by team seeking revenge for his war crimes.

Essentially, this section evolves into a speculative detective story, diving down several rabbit holes. Sands concludes that the Italian doctor was correct in attributing Wachter’s death to liver illness. While instructive as a roadmap for investigative journalists and historians, this section of the book is, frankly, less compelling than earlier ones.

Some Ratline reviewers have questioned the proportionality of Sands’ attention to Wachter and his personal life, given that the Austrian was a mid-level cog in the Nazis’ Holocaust machinery. They suggest it is akin to using a ball peen hammer to kill an ant, or in Wachter’s case, a scorpion.

To be sure, Wachter socialized and worked with the top Nazis: Hitler, Goering, Himmler, Heydrich, as well as fellow functionary Adolf Eichmann. Wachter also attended the infamous Wannsee Conference, which formalized the “Final Solution.”

While Wachter did not make the Nazis’ Holocaust policy, he was energetic and efficient in carrying it out. As Sands documents, Wachter had considerable blood on his hands, some literally. He supervised roundups, transportation and execution of thousands of Jews and, later, the murder of civilian hostages in Poland and Italy.

Months after his death, Wachter was the subject of a newsletter article by Simon Wiesenthal. The famed Nazi hunter wrote that Wachter oversaw the transportation of Wiesenthal’s own mother from the Lemberg ghetto to the death camp.

Devoting 400 pages to a figure like Wachter is both justified and critical, according to Holocaust scholar Alex Grobman.

“In writing history, a historian must examine every part of the puzzle in order to construct an accurate picture of what transpired,” said Grobman, an American who lives in Israel. “Sands’ book is a small part of the puzzle."

Grobman said, “Wachter was a man who could demonstrate great love for his wife, and yet participate in the murder of innocent men woman and children whose only crime was being Jewish.”

Mark I. Pinsky has covered sensational murder cases on both U.S. coasts for nearly half a century, including serial killer Ted Bundy and Green Beret Dr. Jeffrey MacDonald for the New York Times and the Los Angeles Times, among others. He is the author of Met Her on the Mountain: A Forty-Year Quest to Solve the Appalachian Cold-Case Murder of Nancy Morgan.