Rasputin and the Jews: A Reversal of History 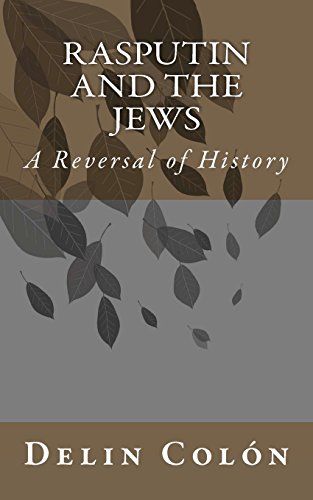 “. . . a brief but well-written exposition on a historical figure who was both maligned and misunderstood when it comes to written Jewish and Russian history.”

Grigory Rasputin was a spiritual advisor to the last Tsar and Tsarina of Russia and their family. In the tumultuous months and years after the fall of the Great Russian Empire, many versions of history were written. Yet all of them include, in one way or another, the tale of the great “Rasputin.”

Even his enemies categorized Rasputin as a powerful historical figure of Russia in the early 20th century. And while vilified by some historians, many other more academic and empirical examples of historical research reveal Rasputin’s role as a contemporary activist for equal rights.

It was popular more than a hundred years ago in Russia to mistrust and hate Jews. Therefore, much of the writing that we find from that time places Rasputin in disrepute since he pushed the Tsar to help Jews, but his opponents, who hated Jews, wrote the history books of the time. Luckily, the victorious or powerful elements of society are not the ultimate owners of all of written history.

Rasputin and the Jews: A Reversal of History explores the insidious foundations of prejudice against Jews in Russia at the turn of the 20th century and Rasputin’s prodigious efforts to combat it. Although not a Jew himself, Rasputin fought for the rights of Jews with all of his faculties and abilities.

In this book, we are treated to examples of Rasputin’s unyielding relationship with the Tsar and perhaps in greater depth with the Tsar’s wife. As a highly spiritual man, Rasputin despised all forms of prejudice and bigotry. During the period of his adult life, the single greatest violation of human rights in Russia was delivered against Jews. The popular trend at that time would have been to decry Jews. Instead, Rasputin defended them.

Rasputin and the Jews contains examples, stories, references, pictures, and illustrations that bring the heartbreaking existence of early 20th century Russian Jews to life in a powerful manner. It delivers a copious amount of information about anti-Jewish prejudice throughout Russia, offering well-researched examples of why so many people throughout that time found it convenient to hate Jews.

Author Colón carefully examines the state of anti-Semitism in an age when Russian Jews were forced to be second-class citizens. Jews in early 20th century Russia lived in the shadow of their ancestors’ extermination; from the Crusades to the Spanish Inquisition, from The Reformation and the English Expulsion, to the rise of Russian pogroms against innocent Jewish families, the Jews defended by Rasputin had for centuries been battered, beaten, enslaved, deprived, made despicable, and forced into a life of subservience.

Centuries of intolerance produced the Diaspora, in which Jews fled from extermination. In Russia, Jews were arbitrarily charged with ritual murder and blood libel, and the Talmud was universally attacked by Christians as well as leading political figures. Jews were almost universally oppressed and degraded.

Violent pogroms against Jewish towns and villages were increasingly common, as my 102-year-old mother can still recall. Only Rasputin, and a few other brave souls, fought for the rights of innocent Jews. The examples of this are carefully delineated in Rasputin and the Jews.

Rasputin and the Jews is a powerful illustration of Russian prejudice—a tool for students of Russian history, Jewish history, and the psychology of oppression and bigotry.

Had we wished for any improvement in Rasputin and the Jews: A Reversal of History, it would have been to broaden the breadth and depth of research cited. Mr. Colón relies heavily on the surviving notes of Rasputin’s Jewish secretary, Aron Simanovitch. A jeweler by trade, Simanovitch left copious notes behind for his progeny and for contemporary researchers. This constitutes the bulk of the author’s research foundation.

While many other Russian figures are cited, Simanovitch remains the source central to this book’s allegations. The book would have benefited from a greater profundity of empirical and anecdotal references. At the same time, we understand that few contemporary individuals have provided a lucid analysis of these events, nor had a first-person experience that is relevant to this study.

That being said, Mr. Colón’s dissertation is a brief but well-written exposition on a historical figure who was both maligned and misunderstood when it comes to written Jewish and Russian history.