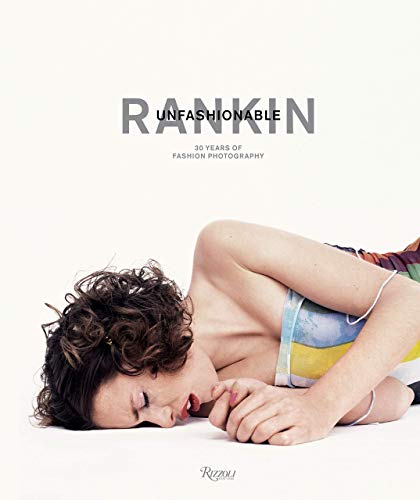 Not knowing quite what to expect from this monograph, this reviewer was pleasantly surprised as Rankin is most certainly a photographer’s photographer. He is a leader, prescient in his approach to the art of fashion photography. One of the most interesting facets of the book is that its chronology is from present to past instead of the reverse. In doing so, the reader is afforded the opportunity to see and understand that this photographer is a visionary on so many levels. Most of all, not one image looks dated.

“As Rankin’s confidence grew (he was always painfully arrogant in public), he wanted to change how we looked at fashion,” says Katie Grand.

What can be drawn from these images is that Rankin is not without influences from some of the greats, as well being an influencer to the next generation that came after him. His oeuvre is in your face and not just a collection of pretty editorial images that one might have seen on the pages of an old Vogue or Harper’s Bazaar. These are the images that evolved from the 1990s with the startup magazines like Dazed & Confused and AnOther. The educated and informed reader will realize that many of these images became the high-water mark of the era and for decades to follow.

As is usually the case with an artist such as Rankin, we have seen relatively little of his work since he is based in London, and his sensibilities lie with the art and craft of modern fashion images and not the standard classic images for the sake of showing editorial clothes; these are images for the sake of the image and story, the clothes are used as a prop rather than being the main focus of each story or photograph.

This is a must own book for those who fancy themselves among the fashion cognoscenti as well as those who believe they are totally up to date with what’s happening within the world of photography and print. The text is brief but enlightening with insights into the mind of the photographer as well as his work ethic, most importantly reflecting the respect he has garnered from his peers and colleagues.